The Rock of Gibraltar, West Side town area, 2006

Gibraltar is an Overseas Territory of the United Kingdom. This means it shares the British King or Queen and has the protection of the British Armed Forces. It is in southwest Europe on the Mediterranean Sea. About 32,000 people live there. They are called Gibraltarians.

Gibraltar is most famous for The Rock of Gibraltar, a 426 meter high limestone rock rising out of the sea. The rock can be seen for many miles. It is home to the Barbary Apes, a type of tail-less macaque which are the only wild monkeys in Europe.

Gibraltar was named for a general who led the Umayyad conquest of Hispania. It belonged to Spain between the years 1501 and 1704, and it was captured by a group of Dutch and British marines during the War of the Spanish Succession (1704). In 1713, Spain signed the Treaty of Utrecht. This treaty ended the war and said Gibraltar would be British permanently. However, according to this treaty, if the Crown of Great Britain ever wants to leave the territory, the Crown of Spain will have a prior position in order to claim the sovereignty.

Gibraltar was very important in World War II. Since it was in such a good position, it was the perfect place for the British army and navy to have its base. In World War II the people living in Gibraltar were taken to different parts of the world like Jamaica so they could be protected from the war and also leave the Rock for the soldiers. The Rock of Gibraltar was used by these soldiers, and long tunnels were made inside it. These tunnels even had a hospital and living areas for the soldiers.

In 1969 Britain gave Gibraltar a new constitution. This meant that it gave the people of Gibraltar a large amount of self-government.

In 2002 the people of Gibraltar were asked to vote whether they wanted Spain to share Gibraltar with the United Kingdom; almost everyone voted and 98.97% said they did not.

In 2006 Gibraltar voted to approve a new constitution which gave full self-government to the people meaning they can independently create their own laws.

In 2006, Spain signed a deal to stop interfering with Gibraltar telephone lines, and daily flights to Madrid started. 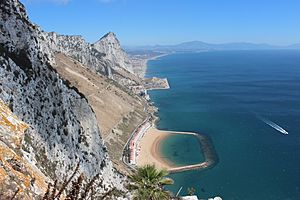 View of the Rock of Gibraltar from the Mediterranean Steps 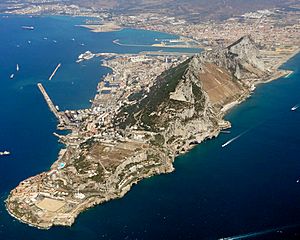 Gibraltar from the air, looking north-west

Gibraltar's territory covers 6.7 square kilometres (2.6 sq mi) and shares a 1.2-kilometre (0.75 mi) land border with Spain. The town of La Línea de la Concepción, a municipality of the province of Cádiz, lies on the Spanish side of the border. The Spanish hinterland forms the comarca of Campo de Gibraltar (literally "Countryside of Gibraltar"). The shoreline measures 12 kilometres (7.5 mi) in length. There are two coasts ("Sides") of Gibraltar: the East Side, which contains the settlements of Sandy Bay and Catalan Bay; and the Westside, where the vast majority of the population lives. Gibraltar has no administrative divisions but is divided into seven Major Residential Areas.

Not having many natural resources and few natural freshwater resources, limited to natural wells in the north, until recently Gibraltar used large concrete or natural rock water catchments to collect rainwater. Fresh water from the boreholes is nowadays supplemented by two desalination plants: a reverse osmosis plant, constructed in a tunnel within the rock, and a multi-stage flash distillation plant at North Mole.

Gibraltar's terrain consists of the 426-metre-high (1,398 ft) Rock of Gibraltar made of Jurassic limestone, and the narrow coastal lowland surrounding it. It contains many tunneled roads, most of which are still operated by the military and closed to the general public. 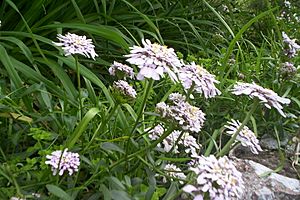 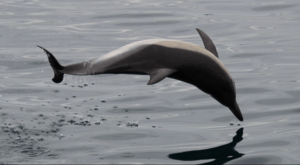 A common dolphin in the Bay of Gibraltar

Over 500 different species of flowering plants grow on the Rock. Gibraltar is the only place in Europe where the Gibraltar candytuft (Iberis gibraltarica) is found growing in the wild; the plant is otherwise native to North Africa. It is the symbol of the Upper Rock nature reserve. Olive and pine trees are among the most common of those growing around the Rock.

Most of the Rock's upper area is covered by a nature reserve which is home to around 230 Barbary macaques, the famous "apes" of Gibraltar, which are actually monkeys. These are the only wild apes or monkeys found in Europe. This species, known scientifically as Macaca sylvanus, is listed as endangered by the IUCN Red List and is declining. Three-quarters of the world population live in the Middle Atlas mountains of Morocco.

Other mammals found in Gibraltar include rabbits, foxes and bats. Dolphins and whales are frequently seen in the Bay of Gibraltar. Migrating birds are very common and Gibraltar is home to the only Barbary partridges found on the European continent. 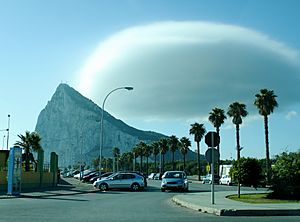 In May 2016 a report by the World Health Organization showed that Gibraltar had the worst air quality in any British territory. The report concentrated on PM10 and PM2.5 pollutants in the air. 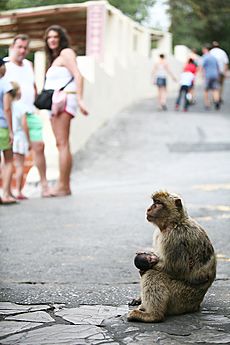 The semi-wild Barbary macaques are an integral feature in Gibraltar's tourism.

Gibraltar's economy today is dominated by four main sectors: financial services, online gambling, shipping, and tourism, which includes duty-free retail sales to visitors. The territory also has a small manufacturing sector, with one company supplying ambulances produced from converted SUV vehicles to the United Nations and other agencies.

Tourism is also a significant industry. Gibraltar is a popular port for cruise ships and attracts day visitors from resorts in Spain. The Rock is a popular tourist attraction, particularly among British tourists and residents in the southern coast of Spain.

The currency of Gibraltar is the Gibraltar pound.

Gibraltar is one of the most densely populated territories in the world, with a usually-resident population in 2012 of 32,194 equivalent to approximately 4,959 inhabitants per square kilometre (12,840/sq mi). The growing demand for space is being increasingly met by land reclamation; reclaimed land makes up approximately one tenth of the territory's total area.

The official language of Gibraltar is English, and is used by the government and in schools. Most locals are bilingual, also speaking Spanish. However, because of the varied mix of ethnic groups which reside there, other languages are also spoken on the Rock. Berber and Arabic are spoken by the Moroccan community, as are Hindi and Sindhi by the Indian community. Maltese is spoken by some families of Maltese descent. 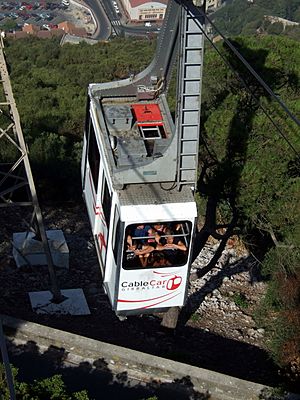 The Gibraltar Cable Car runs from outside the Gibraltar Botanic Gardens to the top of the Rock.

Within Gibraltar, the main form of transport is the car. Motorcycles are also very popular and there is a good modern bus service. Unlike in the UK and other British territories, traffic drives on the right and speed limits are in km/h, as the territory shares a land border with Spain. The E15 highway connecting Spain, France, and the United Kingdom is accessible from the Spanish side using the CA-34 autovía.

There is a Gibraltar Cable Car that runs from ground level to the top of the Rock, with an intermediate station at Apes' Den.

All content from Kiddle encyclopedia articles (including the article images and facts) can be freely used under Attribution-ShareAlike license, unless stated otherwise. Cite this article:
Gibraltar Facts for Kids. Kiddle Encyclopedia.