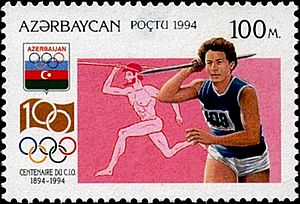 A commemorative stamp from Azerbaijan, celebrating the 100th anniversary of the modern Olympic Games.

An anniversary is a day on which people remember or celebrate an event that happened on the same date in a past year. The most common example is a birthday, where the birth of a person is celebrated every year on the month and day of which they were born. The first anniversary of something is celebrated exactly one year after the initial event occurred. The word was first used for Catholic feasts to commemorate saints.

Other examples of common anniversaries are those of weddings and deaths. Most countries around the world celebrate national anniversaries. These could be the date of independence of the nation or the adoption of a new constitution, or the coronation of a monarch.

All content from Kiddle encyclopedia articles (including the article images and facts) can be freely used under Attribution-ShareAlike license, unless stated otherwise. Cite this article:
Anniversary Facts for Kids. Kiddle Encyclopedia.