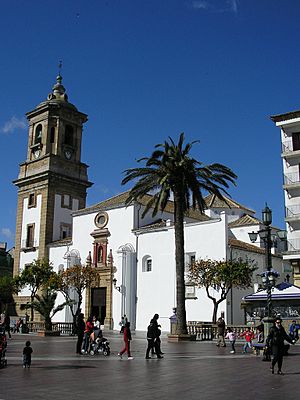 Algeciras is a city in the south of Spain. Is on the Mediterranean coast, in the Bay of Gibraltar. It is also the most important port in the country.

The city has a long history. It was founded by phoenicians. Named Iulia Traducta by the Romans in the First Century. In 711, Arab from the North of Africa invaded the city and renamed it Al-Yazirat al-Hadra (green island). In 1344 the city was conquered by Alfonso XI of Castile but it was reconquered by moors in 1369, ten years before Algeciras was destroyed.

In 1704 the city was refounded by Gibraltarians refugees.

All content from Kiddle encyclopedia articles (including the article images and facts) can be freely used under Attribution-ShareAlike license, unless stated otherwise. Cite this article:
Algeciras Facts for Kids. Kiddle Encyclopedia.