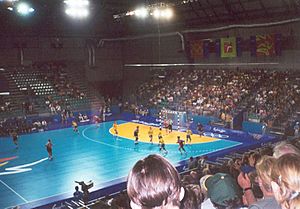 Handball (also known as team handball, field handball or Olympic handball) is a team sport similar to football (soccer). Two teams of 7 players each (six players and a goalkeeper) pass and bounce a ball using the hands, trying to throw it into the goal of the other team. Games are an hour of playing time, divided into 30-minute halves, with 15 minutes break at halftime.

The size of the court is a little bigger than a basketball court, 40 meters by 20 meters, which is the same court as indoor soccer. It has a six meter line which no one but the goalie is allowed to have possession of the ball and touching the ground. If this happens, a foul is called and the player committing the foul gets ejected, (sitting out of the game for two minutes, five minutes, or the rest of the game). There are seven players total on a team handball, six players and a goalie. Most historians agree that handball predates soccer, (football) but that is not for certain.

Unless otherwise noted, the rules described are the official international rules provided by the International Handball Federation (IHF).

The handball playing field is similar to an indoor football field. Two teams of seven players (six field players plus one goalkeeper) take the field and attempt to score points by putting the game ball into the opposing team's goal. In handling the ball, players are subject to the following restrictions: 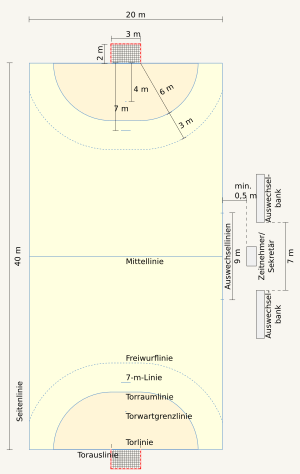 Handball is played on a court 40 by 20 metres (131 ft × 66 ft), with a goal in the center of each end. The goals are surrounded by a near-semicircular area, called the zone or the crease, defined by a line six meters from the goal. A dashed near-semicircular line nine meters from the goal marks the free-throw line. Each line on the court is part of the area it encompasses. This implies that the middle line belongs to both halves at the same time.

Each goal has a rectangular clearance area of three meters in the width and two meters in the height. It must be securely bolted either to the floor or the wall behind.

The goal posts and the crossbar must be made out of the same material (e.g. wood or aluminium) and feature a quadratic cross section with a side of 8 cm (3 in). The three sides of the beams visible from the playing field must be painted alternatingly in two contrasting colors which both have to contrast against the background. The colors on both goals must be the same.

Each goal must feature a net. This must be fastened in such a way that a ball thrown into does not leave or pass the goal under normal circumstances. If necessary, a se

The goals are surrounded by the crease. This area is delimited by two quarter circles with a radius of six meters around the far corners of each goal post and a connecting line parallel to the goal line. Only the defending goalkeeper is allowed inside this perimeter. However, the court players may catch and touch the ball in the air within it as long as the player starts his jump outside the zone and releases the ball before he lands.

Outside of one long edge of the playing field to both sides of the middle line are the substitution areas for each team. The areas usually contain the benches as seating opportunities. Team officials, substitutes and suspended players must wait within this area. The area always lies to the same side as the team's own goal. During half-time substitution areas are swapped. Any player entering or leaving the play must cross the substitution line which is part of the side line and extends 4.5 meters from the middle line to the team's side. 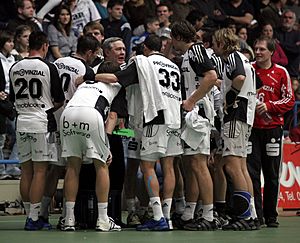 A standard match for all teams of 16 and older has two periods of 30 minutes with a 10 minute half-time. Teams may switch sides of the field, as well as benches. For youths the game duration is:

However, national federations of some countries may differ in their implementation from the official guidelines.

If a decision must be reached in a particular match (e.g. in a tournament) and it ends in a draw after regular time, there are at maximum two overtimes of 2 x 5 minutes with a 1 minute break each. Should these not decide the game either, the winning team is determined in a penalty shootout.

The referees may call timeout according to their sole discretion, typical reasons are injuries, suspensions or court cleaning. Penalty throws should only trigger a timeout for lengthy delays as a change of the goalkeeper.

Each team may call one team timeout (TTO) per period which lasts one minute. This right may only be invoked by team in ball possession. To do so, the representative of the team lays a green card marked by black "T" on the desk of the timekeeper. The timekeeper then immediately interrupts the game by sounding an acoustic signal and stops the time.

All content from Kiddle encyclopedia articles (including the article images and facts) can be freely used under Attribution-ShareAlike license, unless stated otherwise. Cite this article:
Handball Facts for Kids. Kiddle Encyclopedia.