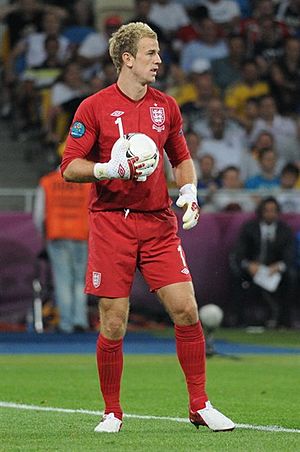 Joe Hart in goal for England vs Italy, European Championship 2012

A goalkeeper is someone who protects a team's goal. There are goalkeepers in sports like football (soccer) and ice hockey, for example. The goalkeeper's mission is to prevent the opposing team from scoring a goal. Goalkeepers normally wear more protective gear than other players on the team but this is not always true.

A goalkeeper's kit (or uniform) consists of shin guards and gloves to protect his hands from the impact of the ball when he catches it.

Historically, however, until the 1960s goalkeepers would wear no hand protection.

Until the early 20th century, the goalkeeper would often wear the same coloured strip as his teammates, with the only different item of clothing being his cap. However, in 1909, the Scottish Football Association took steps to ensure the goalkeeper would wear a different colour from the outfield players. This was to show his different role, as the only player allowed to handle the ball. 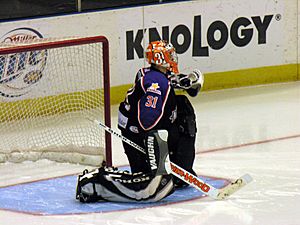 The goalkeeper in ice hockey (a Goalie) uses thicker padding than the other players on the team. This is to prevent damage caused by being hit by the puck. The hockey stick of the goalie is much wider than the stick of other players. The bottom edge is also longer and flatter. The goalie has a very large leather glove on one hand. This glove has a large area to help catch the puck. Goalies normally wear masks that give protection to the entire face and head as well as the neck. 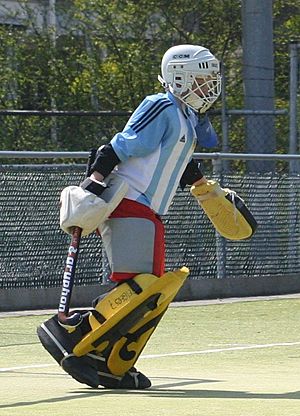 In field hockey, the goalkeeper stands in the goal net, and stops the other team scoring. Goalkeepers need a lot of kit to protect them from the hockey balls that are hit at them. here is a list:

Goalkeepers are the only position in hockey allowed to kick the ball. If another player kicked the ball it would be a foul.

All content from Kiddle encyclopedia articles (including the article images and facts) can be freely used under Attribution-ShareAlike license, unless stated otherwise. Cite this article:
Goalkeeper Facts for Kids. Kiddle Encyclopedia.