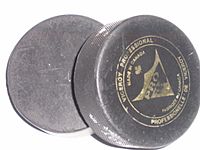 A puck is a disk used in some games serving the same use as a ball in ball games. The best-known use of pucks is in ice hockey, a major international sport.

Hockey pucks are hard disks of rubber that are used to play ice hockey. A standard ice hockey puck is black, 1 inch thick (25.4 mm), 3 inches in diameter (76.2 mm), and weighs between 5.5 and 6 ounces (156-170 g). Pucks are often marked with silkscreened team or league logos on one or both faces.

All content from Kiddle encyclopedia articles (including the article images and facts) can be freely used under Attribution-ShareAlike license, unless stated otherwise. Cite this article:
Hockey puck Facts for Kids. Kiddle Encyclopedia.