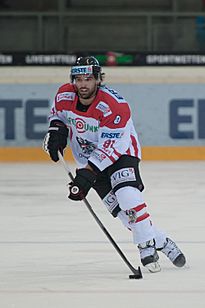 A hockey stick is a long, wooden pole used to push, pass, or shoot in the sports of ice hockey and field hockey. The art of developing ice hockey sticks is a complex science and has become big business. Ice hockey sticks are mostly made of composite materials and they have different "flexes", meaning some sticks are more flexible than others. In ice hockey, the end or blade of the stick is normally curved, to help the player get better control of the puck and better shots at the goaltender. The goaltender has a bigger blade, to make it easier to stop shots. Players sometimes use hockey sticks to hold back the bodies of other players, or to trip or hit them; sometimes players who do this get penalties. In field hockey, sticks are shorter, but the blade is thicker, than in ice hockey. It is used to move a ball instead of a puck. More research has gone into studying how hockey sticks perform. The main difference between the two sticks is how they are used in the games.

All the players in both ice and field hockey use hockey sticks.

All content from Kiddle encyclopedia articles (including the article images and facts) can be freely used under Attribution-ShareAlike license, unless stated otherwise. Cite this article:
Hockey stick Facts for Kids. Kiddle Encyclopedia.