For the similar jobs in other sports, see Goalkeeper. 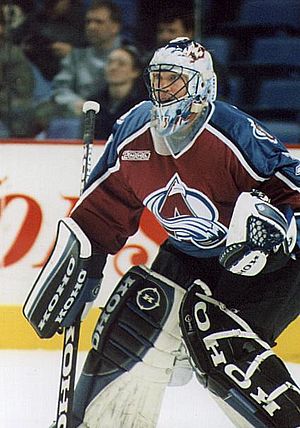 The goaltender (also known colloquially as goalie or netminder) in ice hockey is the player who defends his team's goal net by stopping shots of the puck from entering his team's net, thus stopping the other team from scoring. They usually stay close to the net.

At the very end of a game, if a team is losing by one goal, teams may take their goaltender out of the game and replace him with another player. This makes it more likely that they will score a goal, however, it is also much easier for the other team to score without anybody defending the goal.

All content from Kiddle encyclopedia articles (including the article images and facts) can be freely used under Attribution-ShareAlike license, unless stated otherwise. Cite this article:
Goaltender Facts for Kids. Kiddle Encyclopedia.