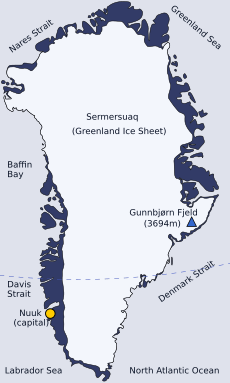 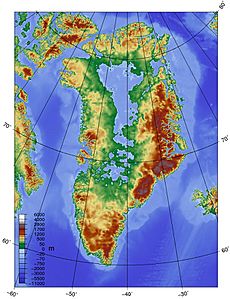 The bedrock under the ice

Greenland is a large Arctic island. It has a population of only 50,000 residents, because of its cold climate. Most of the civilian population lives in the southern part of the island, on the coasts. The capital of Greenland is Nuuk. Greenland is the world's largest island that is not a continent. The island is the least densely populated country in the world, with a density of 0.26 people per square kilometer. (Antarctica and uninhabited islands are not counted because they are not independent countries.)

Since the 1950s, scientists think that the ice sheet that covers Greenland may hide three separate islands, which are joined by glaciers since the last geologic ice age.

In Greenland, there are no forests. In the south, at the coastal area, only some dwarf trees are found. 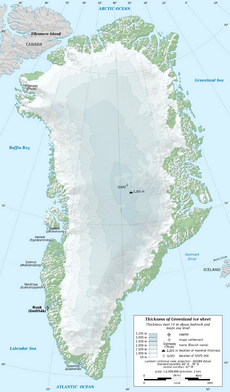 Greenland is the world's largest non-continental island and the third largest country in North America. It lies between latitudes 59° and 83°N, and longitudes 11° and 74°W. The Atlantic Ocean borders Greenland's southeast; the Greenland Sea is to the east; the Arctic Ocean is to the north; and Baffin Bay is to the west. The nearest countries are Canada, to the west across Baffin Bay, and Iceland, east of Greenland in the Atlantic Ocean. Greenland also contains the world's largest national park, and it is the largest dependent territory by area in the world. 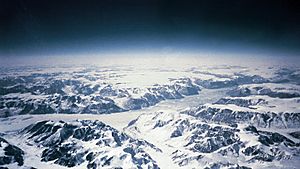 The weight of the ice sheet has depressed the central land area to form a basin lying more than 300 m (984 ft) below sea level, while elevations rise suddenly and steeply near the coast. The ice flows generally to the coast from the centre of the island. A survey led by French scientist Paul-Emile Victor in 1951 concluded that, under the ice sheet, Greenland is composed of three large islands. This is disputed, but if it is so, they would be separated by narrow straits, reaching the sea at Ilulissat Icefjord, at Greenland's Grand Canyon and south of Nordostrundingen.

All towns and settlements of Greenland are situated along the ice-free coast, with the population being concentrated along the west coast. The northeastern part of Greenland is not part of any municipality, but it is the site of the world's largest national park, Northeast Greenland National Park. 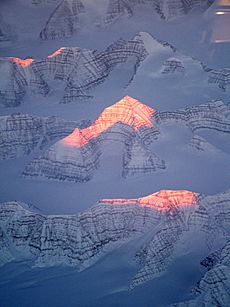 View of mountains on Greenland from the air

At least four scientific expedition stations and camps had been established on the ice sheet in the ice-covered central part of Greenland (indicated as pale blue in the map to the right): Eismitte, North Ice, North GRIP Camp and The Raven Skiway. Currently, there is a year-round station, Summit Camp, on the ice sheet, established in 1989. The radio station Jørgen Brønlund Fjord was, until 1950, the northernmost permanent outpost in the world. 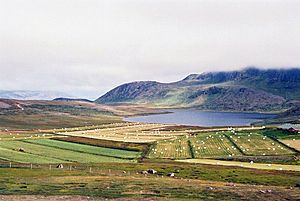 Southern Greenland lives up to its name as it is truly a green land. Agriculture thrives here with many farms and luxuriant vegetables, in contrast to a barren ice world that covers much of Greenland. Hay is harvested in Vatnahverfi, Garðar.

The extreme north of Greenland, Peary Land, is not covered by an ice sheet, because the air there is too dry to produce snow, which is essential in the production and maintenance of an ice sheet. If the Greenland ice sheet were to melt away completely, the world's sea level would rise by more than 7 m (23 ft).

View of Scoresby Sund in eastern Greenland, the longest fjord in the world.

Between 1989 and 1993, US and European climate researchers drilled into the summit of Greenland's ice sheet, obtaining a pair of 3 km (1.9 mi) long ice cores. Analysis of the layering and chemical composition of the cores has provided a revolutionary new record of climate change in the Northern Hemisphere going back about 100,000 years, and illustrated that the world's weather and temperature have often shifted rapidly from one seemingly stable state to another, with worldwide consequences. The glaciers of Greenland are also contributing to a rise in the global sea level at a faster rate than was previously believed. Between 1991 and 2004, monitoring of the weather at one location (Swiss Camp) showed that the average winter temperature had risen almost 6 °C (11 °F). Other research has shown that higher snowfalls from the North Atlantic oscillation caused the interior of the ice cap to thicken by an average of 6 cm or 2.36 in/yr between 1994 and 2005. However, a recent study suggests a much warmer planet in relatively recent geological times:

Scientists who probed 2 km (1.2 mi) through a Greenland glacier to recover the oldest plant DNA on record said that the planet was far warmer hundreds of thousands of years ago than is generally believed. DNA of trees, plants, and insects including butterflies and spiders from beneath the southern Greenland glacier was estimated to date to 450,000 to 900,000 years ago, according to the remnants retrieved from this long-vanished boreal forest. That view contrasts sharply with the prevailing one that a lush forest of this kind could not have existed in Greenland any later than 2.4 million years ago. These DNA samples suggest that the temperature probably reached 10 °C (50 °F) in the summer and −17 °C (1.4 °F) in the winter. They also indicate that during the last interglacial period, 130,000–116,000 years ago, when local temperatures were on average 5 °C (9 °F) higher than now, the glaciers on Greenland did not completely melt away. 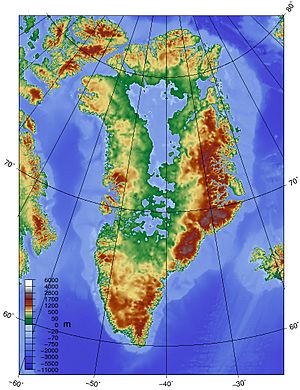 In 1996, the American Top of the World expedition found the world's northernmost island off Greenland: ATOW1996. An even more northerly candidate was spotted during the return from the expedition, but its status is yet to be confirmed.

In 2007 the existence of a new island was announced. Named "Uunartoq Qeqertaq" (English: Warming Island), this island has always been present off the coast of Greenland, but was covered by a glacier. This glacier was discovered in 2002 to be shrinking rapidly, and by 2007 had completely melted away, leaving the exposed island. The island was named Place of the Year by the Oxford Atlas of the World in 2007. Ben Keene, the atlas's editor, commented: "In the last two or three decades, global warming has reduced the size of glaciers throughout the Arctic and earlier this year, news sources confirmed what climate scientists already knew: water, not rock, lay beneath this ice bridge on the east coast of Greenland. More islets are likely to appear as the sheet of frozen water covering the world's largest island continues to melt".[this quote needs a citation]

The island is populated mostly by Inuit and Scandinavians who speak Greenlandic, an Inuit language. Danish is also spoken by most people. The national anthem of Greenland is Nunarput utoqqarsuanngoravit.

In addition, some parts of Greenland are outside a commune, namely: 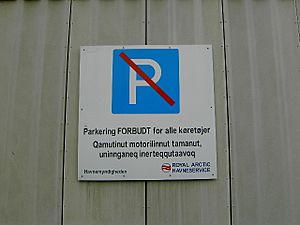 A bilingual sign in Nuuk, displaying the Danish and Kalaallisut for "Parking forbidden for all vehicles".

Both Greenlandic and Danish have been used in public affairs since the establishment of home rule in 1979; the majority of the population can speak both languages. Kalaallisut became the sole official language in June 2009. In practice, Danish is still widely used in the administration and in higher education, as well as remaining the first or only language for some people in Nuuk and the larger towns. A debate about the role of Kalaallisut and Danish in future society is ongoing. The orthography of Kalaallisut was established already in 1851 and revised in 1973, and the country has a 100% literacy rate.

A majority of the population speaks Kalaallisut (West Greenlandic), most of them bilingually. It is spoken by about 50,000 people, making it the most populous of the Eskimo–Aleut language family, spoken by more people than all the other languages of the family combined.

Kalaallisut is the Inuit dialect of West Greenland, which has long been the most populous area of the island. This has led to its de facto status as the official "Greenlandic" language, although the northern dialect Inuktun remains spoken by 1,000 or so people around Qaanaaq and the eastern dialect Tunumiisut by around 3000. These dialects are almost unintelligible to one another and are considered by some linguists to be separate languages. A UNESCO report has labelled the other dialects as endangered and measures are now being considered to protect the Eastern Greenlandic dialect.

About 12% of the population speak Danish as their first or only language, many of them filling positions as administrators, professionals, academics, or skilled tradesmen. While Kalaallisut is dominant in smaller settlements, a part of the population of Inuit or mixed ancestry, especially in towns, speaks Danish as their first language. Most of the Inuit population speak Danish as second language. In larger towns, especially Nuuk and in the higher social strata, this is a large group. While one strategy aims at promoting Greenlandic in public life and education, developing its vocabulary and suitability for complex contexts, this approach is labelled "Greenlandization" by opponents who do not wish to aim at Greenlandic becoming the sole national language.

English is taught in schools from the first year at school. 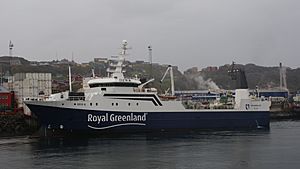 Greenland today is dependent on fishing and fish exports. The shrimp and fish industry is by far the largest income earner. Despite resumption of several hydrocarbon and mineral exploration activities, it will take several years before hydrocarbon production can materialize. The state oil company Nunaoil was created to help develop the hydrocarbon industry in Greenland. The state company Nunamineral has been launched on the Copenhagen Stock Exchange to raise more capital to increase the production of gold, started in 2007.

Mining of ruby deposits began in 2007. Other mineral prospects are improving as prices are increasing. These include iron, uranium, aluminium, nickel, platinum, tungsten, titanium, and copper. 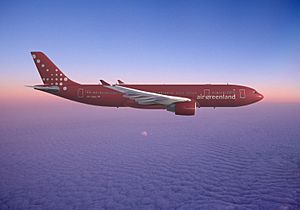 Air transportation exists both within Greenland and between the island and other nations. There is also scheduled boat traffic, but the long distances lead to long travel times and low frequency. There are no roads between cities because the coast has many fjords that would require ferry service to connect a road network, Also the lack of agriculture, forestry and similar countryside activities has meant that very few countryside roads have been built.

Sea passenger and freight transport is served by the coastal ferries operated by Arctic Umiaq Line. It makes a single round trip per week, taking 80 hours each direction.

Greenland's culture began with settlement in the second millennium BC by the Dorset Inuit, shortly after the end of the ice age.

In the 10th century, Icelandic and Norwegian Vikings settled in the southern part of the island, while the Thule Inuit culture was introduced in the north of the island and expanded southward. The culture clash between two peoples is attested by the discovery of a fragment of Viking chain mail at a high latitude of the island, while a figurine carved from walrus ivory, clearly of Inuit origin, was found in Bergen, Norway. Both objects must be understood as a clear testimony of the trade between the two peoples.

Inuit culture dominated the island from the end of the Middle Ages to the recolonization in the early 18th century, where European culture was reintroduced.

Today Greenlandic culture is a blending of traditional Inuit (Kalaallit) and Scandinavian culture. Inuit, or Kalaallit, culture has a strong artistic tradition, dating back thousands of years. The Kalaallit are known for an art form of figures called tupilak or a "spirit object." Traditional art-making practices thrive in the Ammassalik. Sperm whale ivory remains a valued medium for carving.

All content from Kiddle encyclopedia articles (including the article images and facts) can be freely used under Attribution-ShareAlike license, unless stated otherwise. Cite this article:
Greenland Facts for Kids. Kiddle Encyclopedia.