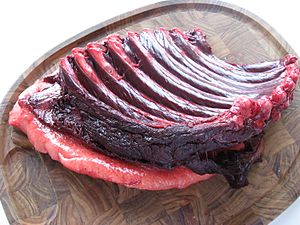 Seal meat is the flesh, including the blubber and organs, of seals used as food for humans or other animals. It is prepared in numerous ways, often being hung and dried before consumption. Historically, it has been eaten in many parts of the world, both as a part of a normal diet, and as sustenance.

Practice of human consumption continues today in Japan, Norway, Iceland, the Faroe Islands, the Inuit and other indigenous peoples of the United States (including the Makah people of the Pacific Northwest), Canada, Greenland; the Chukchi people of Siberia, and Bequia Island in the Caribbean Sea.

Seal blubber and meat was studied to help understand the nutritional composition. Two species were evaluated by the Department of Biology of the University of Bergen and the National Institute of Nutrition and Seafood Research. The species were the hooded seal (Cystophora cristata) and harp seal (Phagophilus groenlandicus). The specimens used in the study were taken from Greenland's West Ice.

Seal meat in general is lean, containing less than 2% fat. This fat is mostly MUFAs, long- and very long chain omega-3 PUFAs. Also, the meat is high in protein and has an amino acid composition that is well balanced. 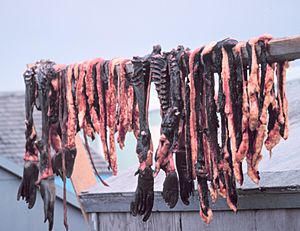 The study showed significant differences in nutritional composition from one seal to another. This may have been due to the highly varied age and size of the seals tested. In general, both the meat and blubber can be considered to be high quality food in terms of bioactive components and nutrients. On average, a woman's recommended daily intake of vitamin B12 and iron can be met with only 40 grams of seal meat.

A significant difference between species was found in the eicosapentaenoic acid (EPA) content of both the meat and blubber. Harp seal blubber contained 9.2% while the muscle tissue contained only 3%.

All content from Kiddle encyclopedia articles (including the article images and facts) can be freely used under Attribution-ShareAlike license, unless stated otherwise. Cite this article:
Seal meat Facts for Kids. Kiddle Encyclopedia.