The harp seal or saddleback seal is a species of earless seal. They live in the northernmost Atlantic Ocean and parts of the Arctic Ocean. It now belongs to the monotypic genus Pagophilus. Its scientific name, Pagophilus groenlandicus, means "ice-lover from Greenland".

The harp seal has a black face with silvery-gray body. Its eyes are pure black. It has black harp or wishbone-shaped markings on the back. They show little sexual dimorphism. This means there is little difference between the males and females. The baby harp seal (pup) has a yellow-white coat at birth. After three days, the coat turns white and stays white for about 12 days. Adult harp seals grow up to be 1.7 to 2.0 m (5 to 6 feet) long and weigh from 140 to 190 kg (300 to 400 pounds).

Harp seals like to swim in the ocean. They spend little time on land. They are very social animals. They can be very noisy, as well. They will form large colonies where they spend a great deal of time. Many harp seals are able to live up to 30 years in the wild.

On the ice, pups call their mothers by "bawling" and "mumble" while playing with others. Adults "growl" and "warble" to warn off others. Underwater, adults use more than 19 call types during courting and mating. 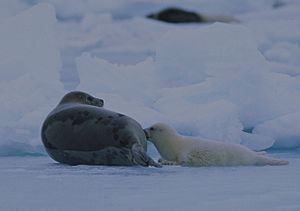 Females mature sexually at age five to six. Then each year, they bear one pup. This is usually in late February.

Weaning is sudden. She leaves the pup behind on the ice. While courtship starts on the ice, mating usually takes place in the water.

Pups are unable to swim or find food until seven to eight weeks old or until the ice melts. This leaves them open to polar bears and other predators. Because they cannot eat, they lose up to 50% of their weight. As many as 30% of pups die during their first year.

The harp seal population is found in three separate populations, each of which uses a specific breeding site. The western North Atlantic stock, which is the largest, is located off eastern Canada. This population is further divided into two separate herds based on the breeding location. The Front herd breeds off the coast of Labrador and Newfoundland, and the Gulf herd breeds near the Magdalen Islands in the middle of the Gulf of St. Lawrence. A second stock breeds on the "West Ice" off eastern Greenland. A third stock breeds on the "East Ice" in the White Sea, which is off the coast of Russia. Breeding occurs between mid-February and April, and varies somewhat for each stock.

All content from Kiddle encyclopedia articles (including the article images and facts) can be freely used under Attribution-ShareAlike license, unless stated otherwise. Cite this article:
Harp seal Facts for Kids. Kiddle Encyclopedia.