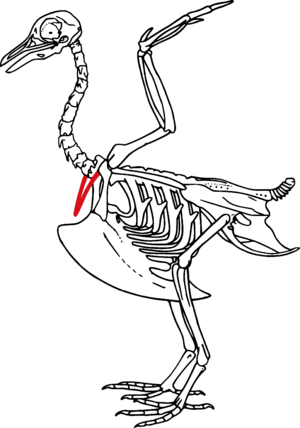 The furcula ("little fork" in Latin) is commonly called the wishbone. It is a forked bone in birds and some extinct dinosaurs.

It is a strut between a bird's shoulders, and connects to each of the bird's scapulae (shoulder blades). A strut is a structure which resists compression (pushing together) along its length.

It is formed by the fusion of the two clavicles (shoulder blades). In birds, its main function is to strengthen the thoracic skeleton to withstand the forces of flight.

X-ray films of starlings in flight have shown that the furcula expands when the wings are pulled downward, and snaps back as they are raised. Acting like a spring, the furcula stores some of the energy generated by contraction of the breast muscles. Then it releases the energy during the upstroke as the furcula snaps back to the normal position. This, in turn, draws the shoulders toward the midline of the body.

Surprisingly, the furcula is not essential for flying, and there are a number of birds which can fly well, but have a reduced furcula, or none at all.

All content from Kiddle encyclopedia articles (including the article images and facts) can be freely used under Attribution-ShareAlike license, unless stated otherwise. Cite this article:
Furcula Facts for Kids. Kiddle Encyclopedia.