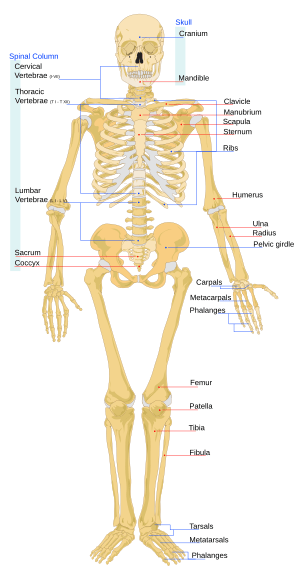 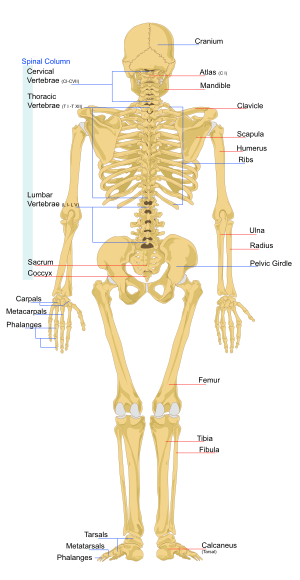 A skeleton from the back

The important parts of a human body are the head, the spine, the chest, the abdomen, the arms and hands, and the legs and feet.

Bones of the head

The head bones all together are called the skull.

Bones of the spine

The spine supports the head, the chest and the structure that carries the arms. It is made of small bones called vertebrae. The spine, all together, is called the spinal column. It is not straight, but has curves that help to support the body, and help the person to move and bend. One bone is a "vertebra". More than one are "vertebrae". The "vertebrae" have different names, depending on the part of the body they are joined to.

Bones of the pelvis

This part of the body is made of the sacrum and the two pelvic bones which are joined to it on either side. The pelvic bones are carried by the leg bones, and they support the "spinal column". Each pelvic bone has a strong structure for the leg bone to fit into, so that a person can stand, walk, run and jump. Each pelvic bone spreads into a large flat plate which supports the person's "internal organs". The pelvis of a woman spreads into a wider shape than a man's, so that when the woman is pregnant, the baby is supported by the pelvis, until it is ready to be born. At the bottom of the pelvis is a large opening, big enough for a baby to pass through.

Bones of the chest

At the top of the "thorax" is the shoulder girdle. This is made of two thin horizontal bones at the front, joined to the "sternum". These two bones are called the clavicles or "collar bones". At the back of the "thorax" are two flat triangular-shaped bones called the scapulae, or "shoulder blades". The "clavicles" and "scapulae" come together on each side to make "shoulders". The bones of the arms fit into sockets (cup-like holes) in the "scapulae".

Bones of the limbs

Arms and legs both have a thicker bone at the top and two thinner bones at the bottom. They both have a rotating joint at the top, and a hinge joint in the middle. The hands and feet have lots of bones and are joined to the arms and legs by small bones with sliding parts.

Bones of the arms

Bones of the legs

A skeleton, or just a skull, has often been used as a symbol for Death.

Skeletons appear in the popular game: Minecraft. In Minecraft, skeletons have bows that try to shoot the player.

All content from Kiddle encyclopedia articles (including the article images and facts) can be freely used under Attribution-ShareAlike license, unless stated otherwise. Cite this article:
Skeleton Facts for Kids. Kiddle Encyclopedia.