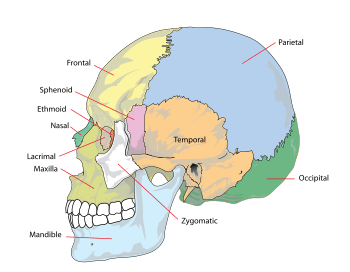 A lateral (side) view of the human skull

A human skull, seen from the front

A skull, or cranium, is a set of bones that make up the head of a vertebrate and keep in place all body parts in the head. It supports the structures of the face and forms a protective cavity for the brain.

As well as protecting the brain, the skull fixes the distance between the eyes and between the ears. This allows stereoscopic vision, and helps help the brain judge direction and distance of sounds. In some animals, the skull also has a defensive function (e.g. horned ungulates). The frontal bone is where horns are mounted.

The skull is made of a number of joined (fused) flat bones. In humans, the adult skull is normally made up of 28 bones.

All content from Kiddle encyclopedia articles (including the article images and facts) can be freely used under Attribution-ShareAlike license, unless stated otherwise. Cite this article:
Skull Facts for Kids. Kiddle Encyclopedia.