Swordfish (Xiphias gladius), also known as broadbills in some countries, are large, highly migratory, predatory fish characterized by a long, flat, pointed bill. They are a popular sport fish of the billfish category, though elusive. Swordfish are elongated, round-bodied, and lose all teeth and scales by adulthood. These fish are found widely in tropical and temperate parts of the Atlantic, Pacific, and Indian Oceans, and can typically be found from near the surface to a depth of 550 m (1,800 ft). They commonly reach 3 m (9.8 ft) in length, and the maximum reported is 4.55 m (14.9 ft) in length and 650 kg (1,430 lb) in weight..

They are the sole member of their family Xiphiidae. 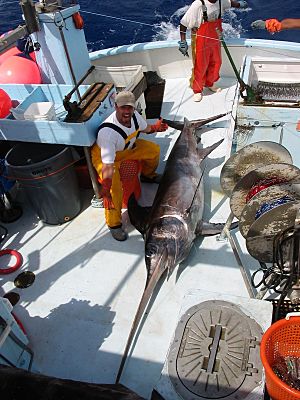 Swordfish on deck during long-lining operations

They commonly reach 3 m (9.8 ft) in length, and the maximum reported is 4.55 m (14.9 ft) in length and 650 kg (1,430 lb) in weight. The International Game Fish Association's all-tackle angling record for a swordfish was a 536 kg (1,182 lb) specimen taken off Chile in 1953. Females are larger than males, and Pacific swordfish reach a greater size than northwest Atlantic and Mediterranean swordfish. They reach maturity at 4–5 years of age and the maximum age is believed to be at least 9 years. The oldest swordfish found in a recent study were a 16-year-old female and 12-year-old male. Swordfish ages are derived, with difficulty, from annual rings on fin rays rather than otoliths, since their otoliths are small in size.

Swordfish are ectothermic animals; however, along with some species of sharks, they have special organs next to their eyes to heat their eyes and brains. Temperatures of 10 to 15 °C (18 to 27 °F) above the surrounding water temperature have been measured. The heating of the eyes greatly improves their vision, and consequently improves their ability to catch prey. Of the 25 000+ fish species, only 22 are known to have a mechanism to conserve heat. These include the swordfish, marlin, tuna, and some sharks.

Contrary to popular belief, the "sword" is not used to spear, but instead may be used to slash at its prey to injure the prey animal, to make for an easier catch. Mainly, the swordfish relies on its great speed and agility in the water to catch its prey. It is no doubt among the fastest fish, but the basis for the frequently quoted speed of 97 km/h (60 mph) is unreliable.

Swordfish prefer water temperatures between 18 and 22 °C (64 and 72 °F), but have the widest tolerance among billfish, and can be found from 5 to 27 °C (41 to 81 °F). This highly migratory species typically moves towards colder regions to feed during the summer. Swordfish feed daily, most often at night, when they rise to surface and near-surface waters in search of smaller fish. During the day, they commonly occur to depths of 550 m (1,800 ft) and have exceptionally been recorded as deep as 2,878 m (9,442 ft). Adults feed on a wide range of pelagic fish, such as mackerel, barracudinas, silver hake, rockfish, herring, and lanternfishes, but they also take demersal fish, squid, and crustaceans. In the northwestern Atlantic, a survey based on the stomach content of 168 individuals found 82% had eaten squid and 53% had eaten fish, including gadids, scombrids, butterfish, bluefish, and sand lance. Large prey are typically slashed with the sword, while small are swallowed whole.

Swordfish are not schooling fish. They swim alone or in very loose aggregations, separated by as much as 10 m (33 ft) from a neighboring swordfish. They are frequently found basking at the surface, airing their first dorsal fin. Boaters report this to be a beautiful sight, as is the powerful jumping for which the species is known. This jumping, also called breaching, may be an effort to dislodge pests, such as remoras or lampreys.fish. 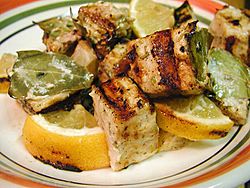 Swordfish is a particularly popular fish for cooking. Since swordfish are large animals, meat is usually sold as steaks, which are often grilled. The color of the flesh varies by diet, with fish caught on the east coast of North America often being rosier.

However, many sources including the United States Food and Drug Administration warn about potential toxicity (how poisonous it is) from high levels of methylmercury in swordfish.

All content from Kiddle encyclopedia articles (including the article images and facts) can be freely used under Attribution-ShareAlike license, unless stated otherwise. Cite this article:
Swordfish Facts for Kids. Kiddle Encyclopedia.