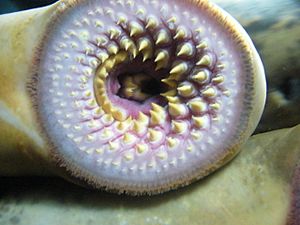 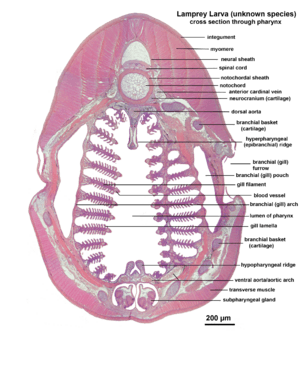 Lampreys (sometimes also called, inaccurately, lamprey eels) are an ancient lineage of jawless fish of the order Petromyzontiformes, placed in the superclass Cyclostomata. The adult lamprey may be characterized by a toothed, funnel-like sucking mouth. The common name "lamprey" is probably derived from Latin lampetra, which may mean "stone licker" (lambere "to lick" + petra "stone"), though the etymology is uncertain.

There are about 38 known extant species of lampreys. "Parasitic," carnivorous species are the most well-known, and feed by boring into the flesh of other fish to suck their blood; but only 18 species of lampreys engage in this lifestyle (more correctly known as "micro-predation"). Of the 18 parasitic species, nine are anadromous (some of them also have freshwater populations), and nine live exclusively in freshwater. Also all the non-parasitic forms are freshwater species. Carnivorous lampreys also attach themselves to larger animals to get a free ride. Adults of the non-carnivorous species do not feed; they live off reserves acquired as ammocoetes (larvae), which they obtain through filter feeding.

Lampreys live mostly in coastal and fresh waters, although some species (e.g. Geotria australis, Petromyzon marinus, and Entosphenus tridentatus) travel significant distances in the open ocean, as evidenced by their lack of reproductive isolation between populations. Some species are found in land-locked lakes. They are found in most temperate regions except those in Africa. Their larvae (ammocoetes) have a low tolerance for high water temperatures, which may explain why they are not distributed in the tropics.

Lamprey distribution may be adversely affected by overfishing and pollution. In Britain, at the time of the Conquest, lampreys were found as far upstream in the River Thames as Petersham . Reduction of pollution in the Thames and River Wear has led to recent sightings in London and Chester-le-Street.

Distribution may also be adversely affected by dams and other construction projects disrupting migration routes, obstructing access to spawning grounds. Conversely, the construction of artificial channels has exposed new habitats for colonisation notably in North America where sea lampreys have become a significant introduced pest in the Great Lakes. Active control programs to control lampreys are undergoing modifications due to concerns of drinking water quality in some areas.

Adults superficially resemble eels in that they have scaleless, elongated bodies, and can range from 13 to 100 cm (5 to 40 inches) in length. Lacking paired fins, adult lampreys have large eyes, one nostril on the top of the head, and seven gill pores on each side of the head. The pharynx is subdivided; the ventral part forming a respiratory tube that is isolated from the mouth by a valve called the velum.

This is an adaptation to how the adults feed, by preventing the prey's body fluids from escaping through the gills or interfering with gas exchange, which takes place by pumping water in and out of the gill pouches instead of taking it in through the mouth. Near the gills are the eyes, which are poorly developed and buried under skin in the larvae. The eyes complete their development during metamorphosis, and are covered by a thin and transparent layer of skin that becomes opaque in preservatives. Their teeth consist of a meshwork of keratin filaments and other proteins.

The unique morphological characteristics of lampreys, such as their cartilaginous skeleton, suggest they are the sister taxon (see cladistics) of all living jawed vertebrates (gnathostomes), and are usually considered the most basal group of the Vertebrata. Instead of true vertebrae, they have a series of cartilaginous structures called arcualia arranged above the notochord. Hagfish, which resemble lampreys, have traditionally been considered the sister taxon of the true vertebrates (lampreys and gnathostomes) but DNA evidence suggests that they are in fact the sister taxon of lampreys.

Studies have shown that lampreys are amongst the most energy-efficient swimmers. Their swimming movements generate low-pressure zones around their body, which pull rather than push their bodies through the water.

The last common ancestor of lampreys appears to have been specialized to feed on the blood and body fluids of other fish after metamorphosis. They attach their mouthparts to the target animal's body, then use three horny plates (laminae) on the tip of their piston-like tongue, one transversely and two longitudinally placed, to scrape through surface tissues until they reach body fluids. The teeth on their oral disc are primary used to help the animal attach itself to its prey. The teeth have a hollow core to give room for replacement teeth growing under the old ones. Some of the original blood-feeding forms have evolved into species that feed on both blood and flesh, and some who have become specialized to eat flesh and may even invade the internal organs of the host. Tissue feeders can also involve the teeth on the oral disc in the excision of tissue. As a result the flesh-feeders have smaller buccal glands as they don't require to produce anticoagulant continuously and mechanisms for preventing solid material entering the branchial pouches whoch could otherwise potentially clogging the gills. A study of stomach content of some lampreys have shown remains of intestines, fins and vertebrae from their prey. Although attacks on humans do occur, they will generally not attack humans unless starved.

Parasitic forms has given rise to the non-parasitic species, and "giant" individuals amongst the otherwise small American brook lamprey has occasionally been observed, leading to the hypothesis that sometimes individual members of non-parasitic forms return to the parasitic lifestyle of their ancestors.

Research on sea lampreys has revealed that sexually mature males use a specialized heat-producing tissue in the form of a ridge of fat cells near the anterior dorsal fin to stimulate females. After having attracted a female with pheromones, the heat detected by the female through body contact will encourage spawning.

Northern lampreys (Petromyzontidae) have the highest number of chromosomes (164–174) among vertebrates.

Pouched lamprey (Geotria australis) larvae also have a very high tolerance for free iron in their bodies, and have well-developed biochemical systems for detoxification of the large quantities of these metal ions.

Lampreys are the only extant verterbrate to have four eyes. Most lampreys have two additional parietal eyes: a pineal and parapineal one (the exception is members of Mordacia). 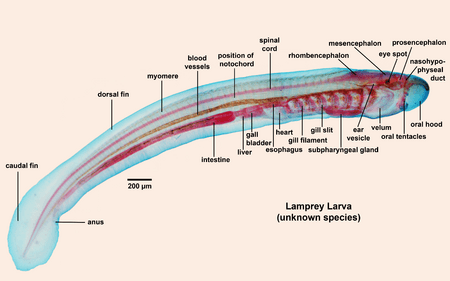 Larva of an unknown lamprey species

The adults spawn in nests of sand, gravel and pebbles in clear streams, and after hatching from the eggs, young larvae—called ammocoetes—will drift downstream with the current till they reach soft and fine sediment in silt beds, where they will burrow in silt, mud and detritus, taking up an existence as filter feeders, collecting detritus, algae, and microorganisms. The eyes of the larvae are underdeveloped, but are capable of discriminating changes in illuminance. Ammocoetes can grow from 3–4 inches (8–10 cm) to about 8 inches (20 cm). Many species change color during a diurnal cycle, becoming dark at day and pale at night. The skin also has photoreceptors, light sensitive cells, most of them concentrated in the tail, which helps them to stay buried. Lampreys may spend up to eight years as ammocoetes,, while species such as the Arctic lamprey may only spend one to two years as larvae, prior to undergoing a metamorphosis which generally lasts 3-4 months, but can vary between species. While metamorphosing, they do not eat.

The rate of water moving across the ammocoetes' feeding apparatus is the lowest recorded in any suspension feeding animal, and they therefore requires water rich in nutrients to fulfill their nutritional needs. While the majority of (invertebrate) suspension feeders thrive in waters containing under 1 mg suspended organic solids per litre (>1 mg/l), ammocoetes demand minimum 4 mg/l, with concentrations in their habitats having been measured up to 40 mg/l.

During metamorphosis the lamprey loses both the gallbladder and the biliary tract, and the endostyle turns into a thyroid gland.

Some species, including those that are not parasitic and do not feed even following metamorphosis, live in freshwater for their entire lifecycle, spawning and dying shortly after metamorphosing. In contrast, many species are anadromous and migrate to the sea, beginning to prey on other animals while still swimming downstream after their metamorphosis provides them with eyes, teeth, and a sucking mouth. Those that are anadromous are parasitic, feeding on fishes or marine mammals.

Anadromous lampreys spend up to four years in the sea before migrating back to freshwater where they spawn. Adults create nests (called redds) by moving rocks, and females release thousands of eggs, sometimes up to 100,000. The male, intertwined with the female, fertilizes the eggs simultaneously. Being semelparous, both adults die after the eggs are fertilized. 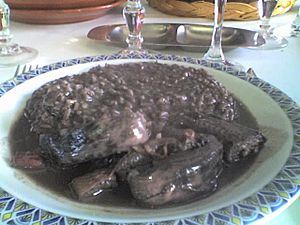 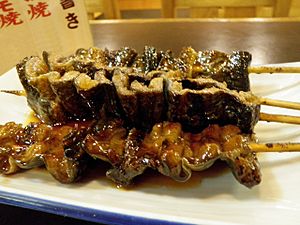 On 4 March 1953, Queen Elizabeth II's coronation pie was made by the Royal Air Force using lampreys.

In southwestern Europe (Portugal, Spain, and France), the northern half of Finland and in Latvia (where lamprey is routinely sold in supermarkets), larger lampreys are still a highly prized delicacy. Sea lamprey is the most sought-after species in Portugal and one of only two that can legally bear the commercial name "lamprey" (lampreia): the other one being Lampetra fluviatilis, the European river lamprey, both according to Portaria (Government regulation no. 587/2006, from 22 June). Overfishing has reduced their number in those parts. Lampreys are also consumed in Sweden, Russia, Lithuania, Estonia, Japan, and South Korea. In Finland, they are commonly sold pickled in vinegar.

The mucus and serum of several lamprey species, including the Caspian lamprey (Caspiomyzon wagneri), river lampreys (Lampetra fluviatilis and L. planeri), and sea lamprey (Petromyzon marinus), are known to be toxic, and require thorough cleaning before cooking and consumption.

In Britain, lampreys are commonly used as bait, normally as dead bait. Northern pike, perch, and chub all can be caught on lampreys. Frozen lampreys can be bought from most bait and tackle shops.

All content from Kiddle encyclopedia articles (including the article images and facts) can be freely used under Attribution-ShareAlike license, unless stated otherwise. Cite this article:
Lamprey Facts for Kids. Kiddle Encyclopedia.