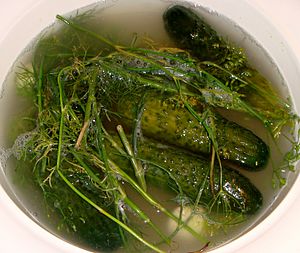 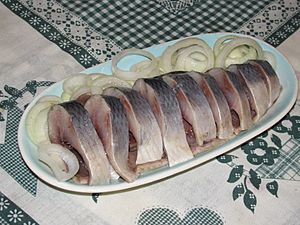 Pickling is a method of making food last longer. In pickling, the food is put either into vinegar, or in salt water (called brine). Pickling also changes the flavour of the food. Vegetables are often preserved like this.

The key to pickling is that it produces low pH, 4.6 or lower. This kills most bacteria. Pickling can preserve perishable foods for months. Anti-microbial herbs and spices, such as mustard seed, garlic, cinnamon or cloves, are often added. 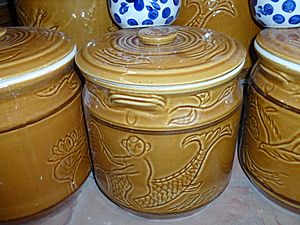 In traditional pickling, fruit or vegetables are submerged in brine (20-40 grams/L of salt (3.2–6.4 oz/imp gal or 2.7–5.3 oz/US gal)), or shredded and salted as in sauerkraut preparation, and held underwater by flat stones layered on top. Alternatively, a lid with an airtrap or a tight lid may be used if the lid is able to release pressure which may result from carbon dioxide buildup. Mold or (white) kahm yeast may form on the surface; kahm yeast is mostly harmless but can impart an off taste and may be removed without affecting the pickling process.

In chemical pickling, the fruits or vegetables to be pickled are placed in a sterilized jar along with brine, vinegar, or both, as well as spices, and are then allowed to mature until the desired taste is obtained.

The food can be pre-soaked in brine before transferring to vinegar. This reduces the water content of the food, which would otherwise dilute the vinegar. This method is particularly useful for fruit and vegetables with a high natural water content.

In commercial pickling, a preservative such as sodium benzoate or EDTA may also be added to enhance shelf life. In fermentation pickling, the food itself produces the preservation agent, typically by a process involving Lactobacillus bacteria that produce lactic acid as the preservative agent.

Alum is used in pickling to promote crisp texture and is approved as a food additive by the United States Food and Drug Administration.

"Refrigerator pickles" are unfermented pickles made by marinating fruit or vegetables in a seasoned vinegar solution. They must be stored under refrigeration or undergo canning to achieve long-term storage.

Japanese Tsukemono use a variety of pickling ingredients depending on their type , and are produced by combining these ingredients with the vegetables to be preserved and putting the mixture under pressure.

All content from Kiddle encyclopedia articles (including the article images and facts) can be freely used under Attribution-ShareAlike license, unless stated otherwise. Cite this article:
Pickling Facts for Kids. Kiddle Encyclopedia.