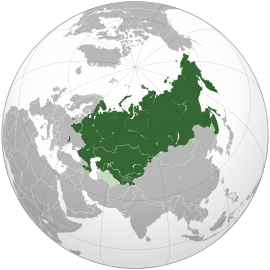 The Commonwealth of Independent States (CIS) is the confederation of countries that used to form the Soviet Union.

On December 8, 1991, leaders of Russia, Belarus, and Ukraine met at the nature reserve called Belovezhskaya Pushcha in Belarus. They discussed the creation of the Commonwealth of Independent States (CIS) in place of the Soviet Union. They reached an agreement about many points and signed a document creating the CIS. One of these points stated that the alliance would be open to all the republics of the Soviet Union. Other nations with similar goals could also join the CIS.

The Soviet Union had 15 republics: Armenia, Azerbaijan, Belarus, Kazakhstan, Kyrgyzstan, Moldova, Russia, Tajikistan, Turkmenistan, Ukraine, Uzbekistan, Georgia, Estonia, Latvia, and Lithuania. On 6th September 1991, the Soviet Union had recognized the independence of Estonia, Latvia, and Lithuania. Out of the remaining 12 republics, all (except Georgia) joined the CIS. Before joining the CIS, on 21st December 1991, leaders of these 11 countries had met in Kazakhstan to accept the original CIS agreement of 8th December 1991. Because Ukraine did not ratify the CIS agreement in the national parliament, it never became an official member of the CIS, but nevertheless participated as a de facto member. In December 1993, Georgia also joined the CIS. On 26th August 2006 Turkmenistan left the permanent membership, and became an associate member. On 15th August 2008 Georgia left the CIS membership, and Georgia's CIS membership officially ended on 17th August 2009. On 19 May 2018, Ukraine, which stopped participating in CIS in 2014 because of its conflict with Russia over Crimea and the Donbass, formally ended all participation in CIS.

The CIS has its headquarters at Minsk, Belarus. An Executive Director heads the CIS. The CIS is not a successor country to the Soviet Union. The CIS is an organization or alliance of independent countries. It is more like the European Community. The member countries of the CIS had also signed many agreements for economic cooperation and defense cooperation. They have signed other agreements for cooperation in foreign policy and other matters.

All content from Kiddle encyclopedia articles (including the article images and facts) can be freely used under Attribution-ShareAlike license, unless stated otherwise. Cite this article:
Commonwealth of Independent States Facts for Kids. Kiddle Encyclopedia.