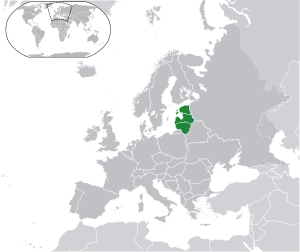 A map showing the location of the three Baltic states

The Baltic states are three countries in Northern Europe to the east of the Baltic Sea and the south of the Gulf of Finland. They are, from north to south, Estonia, Latvia and Lithuania. The languages that are spoken in these countries are different: while Lithuanians and Latvians speak Baltic languages (Latvian and Lithuanian), Estonians speak an Uralic language (Estonian).

All three Baltic states had their freedom back in 1991, when the Soviet Union came to an end. However, the states all consider the Soviet occupation to be illegal, which has been supported by the United States, European Union, and United Nations. Today, the Baltic countries are some of the richest and most advanced countries which were part of the Soviet Union. They became members of the European Union and NATO in 2004, joined the Schengen Area in 2007, and became part of the eurozone by 2015.

Paganism was the religion of Baltic people before most of them took Christianity during the Middle Ages. Baltic paganism never died out and some people are still pagans.

All content from Kiddle encyclopedia articles (including the article images and facts) can be freely used under Attribution-ShareAlike license, unless stated otherwise. Cite this article:
Baltic states Facts for Kids. Kiddle Encyclopedia.