Latvia is a country in Northern Europe. The capital is Riga. It is one of the Baltic States, together with Estonia in the north and Lithuania in the south. Latvia's neighbours to the east are the countries Russia and Belarus. Latvia is split into four parts called Kurzeme, Vidzeme, Zemgale, and Latgale.

People from Latvia are called Latvians. They speak the Latvian language, which is a little like the Lithuanian language, though not close enough to be understood.

Latvia was settled by the Baltic tribes thousands of years ago. They mainly fished, hunted, and traded.

German traders and crusaders came to Latvia at the end of the 12th century. Latvians lost control of their homeland. Over the next 800 years, Germans, Danes, Swedes, Poles, and Russians all invaded Latvia. Latvia finally became independent in 1918.

The Soviet Union invaded Latvia during World War II and killed or took away many of its people to Siberia and other places far away from their homes. The Soviet Union then invaded again and occupied Latvia until 1991, when the Soviet Union fell apart and Latvia became an independent country again. 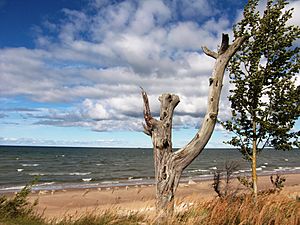 Cape Kolka, the northern tip of Latvia in the Gulf of Riga

Latvia lies in Northern Europe, on the eastern shores of the Baltic Sea.

Latvia has a temperate climate that has been described in various sources as either humid continental (Köppen Dfb) or oceanic/maritime (Köppen Cfb). 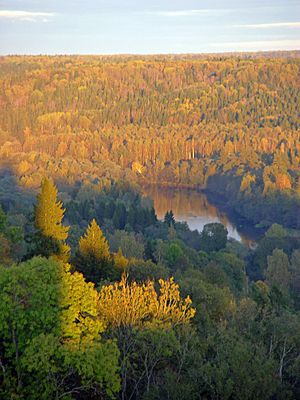 Latvia has the fifth highest proportion of land covered by forests in the European Union.

Most of the country is composed of fertile lowland plains and moderate hills. In a typical Latvian landscape, a mosaic of vast forests alternates with fields, farmsteads, and pastures. Arable land is spotted with birch groves and wooded clusters, which afford a habitat for numerous plants and animals. Latvia has hundreds of kilometres of undeveloped seashore—lined by pine forests, dunes, and continuous white sand beaches.

Latvia has the 5th highest proportion of land covered by forests in the European Union, after Sweden, Finland, Estonia and Slovenia. Forests account for 3,497,000 ha (8,640,000 acres) or 56% of the total land area. 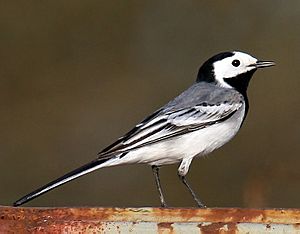 The white wagtail is the national bird of Latvia.

Approximately 30,000 species of flora and fauna have been registered in Latvia. Common species of wildlife in Latvia include deer, wild boar, moose, lynx, bear, fox, beaver and wolves. Non-marine molluscs of Latvia include 159 species.

Phytogeographically, Latvia is shared between the Central European and Northern European provinces of the Circumboreal Region within the Boreal Kingdom. According to the WWF, the territory of Latvia belongs to the ecoregion of Sarmatic mixed forests. 56 percent of Latvia's territory is covered by forests, mostly Scots pine, birch, and Norway spruce.

Several species of flora and fauna are considered national symbols. Oak (Quercus robur, Latvian: ozols), and linden (Tilia cordata, Latvian: liepa) are Latvia's national trees and the daisy (Leucanthemum vulgare, Latvian: pīpene) its national flower. The white wagtail (Motacilla alba, Latvian: baltā cielava) is Latvia's national bird. Its national insect is the two-spot ladybird (Adalia bipunctata, Latvian: divpunktu mārīte). Amber, fossilized tree resin, is one of Latvia's most important cultural symbols. In ancient times, amber found along the Baltic Sea coast was sought by Vikings as well as traders from Egypt, Greece and the Roman Empire. This led to the development of the Amber Road.

Several nature reserves protect unspoiled landscapes with a variety of large animals. At Pape Nature Reserve, where European bison, wild horses, and recreated aurochs have been reintroduced, there is now an almost complete Holocene megafauna also including moose, deer, and wolf.

Latvia's population has been multiethnic for centuries, though the demographics shifted dramatically in the 20th century due to the World Wars, the emigration and removal of Baltic Germans, the Holocaust, and occupation by the Soviet Union. According to the Russian Empire Census of 1897, Latvians formed 68.3% of the total population of 1.93 million; Russians accounted for 12%, Jews for 7.4%, Germans for 6.2%, and Poles for 3.4%.

The sole official language of Latvia is Latvian, which belongs to the Baltic language sub-group of the Balto-Slavic branch of the Indo-European language family. Another notable language of Latvia is the nearly extinct Livonian language of the Finnic branch of the Uralic language family, which enjoys protection by law; Latgalian – referred to as either a dialect or a distinct separate language of Latvian – is also formally protected by Latvian law but only as a historical variation of the Latvian language. Russian, which was widely spoken during the Soviet period, is still the most widely used minority language by far (about 34% speak it at home, including people who are not ethnically Russian). While it is now required that all school students learn Latvian, most schools also include English and either German or Russian in their curricula. English is widely accepted in Latvia, especially in business and tourism. As of 2014[update] there are 109 schools for minorities that use Russian as the language of instruction for 40% of subjects (the remaining 60% of subjects are taught in Latvian).

Traditional Latvian folklore, especially the dance of the folk songs, dates back well over a thousand years. More than 1.2 million texts and 30,000 melodies of folk songs have been identified.

Between the 13th and 19th centuries, Baltic Germans, many of whom were originally of non-German ancestry but had been assimilated into German culture, formed the upper class. They developed distinct cultural heritage, characterised by both Latvian and German influences. It has survived in German Baltic families to this day, in spite of their dispersal to Germany, the United States, Canada and other countries in the early 20th century. However, most indigenous Latvians did not participate in this particular cultural life. Thus, the mostly peasant local pagan heritage was preserved, partly merging with Christian traditions. For example, one of the most popular celebrations is Jāņi, a pagan celebration of the summer solstice—which Latvians celebrate on the feast day of St. John the Baptist. 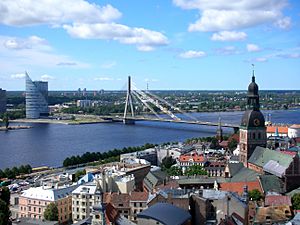 Historic Centre of Riga was declared a World Heritage Site by UNESCO in 1997.

In the 19th century, Latvian nationalist movements emerged. They promoted Latvian culture and encouraged Latvians to take part in cultural activities. The 19th century and beginning of the 20th century is often regarded by Latvians as a classical era of Latvian culture. Posters show the influence of other European cultures, for example, works of artists such as the Baltic-German artist Bernhard Borchert and the French Raoul Dufy. With the onset of World War II, many Latvian artists and other members of the cultural elite fled the country yet continued to produce their work, largely for a Latvian émigré audience.

Latvian Song and Dance Festival is an important event in Latvian culture and social life. It has been held since 1873, normally every five years. Approximately 30,000 performers altogether participate in the event. Although usually folksongs and classical choir songs are sung, with emphasis on a cappella singing, recently modern popular songs have been incorporated into the repertoire, as well.

After incorporation into the Soviet Union, Latvian artists and writers were forced to follow the socialist realism style of art. During the Soviet era, music became increasingly popular, with the most popular being songs from the 1980s. At this time, songs often made fun of the characteristics of Soviet life and were concerned about preserving Latvian identity. This aroused popular protests against the USSR and also gave rise to an increasing popularity of poetry. Since independence, theatre, scenography, choir music, and classical music have become the most notable branches of Latvian culture.

During July 2014, Riga hosted the 8th World Choir Games as it played host to over 27,000 choristers representing over 450 choirs and over 70 countries. The festival is the biggest of its kind in the world and is held every two years in a different host city.

Latvian cuisine typically consists of agricultural products, with meat featuring in most main meal dishes. Fish is commonly consumed due to Latvia's location on the Baltic Sea. Latvian cuisine has been influenced by the neighbouring countries. Common ingredients in Latvian recipes are found locally, such as potatoes, wheat, barley, cabbage, onions, eggs, and pork. Latvian food is generally quite fatty, and uses few spices.

Grey peas and ham are generally considered as staple foods of Latvians. Sorrel soup is also consumed by Latvians. Rupjmaize is a dark bread made from rye, considered the national staple.

In Copenhagen on 13 December 2002, Latvia and nine other countries were invited to join the European Union. On 20 September 2003, Latvians held an election to vote on joining. Two thirds of Latvians voted to join, and on 1 May 2004 Latvia became a member of the EU.

All content from Kiddle encyclopedia articles (including the article images and facts) can be freely used under Attribution-ShareAlike license, unless stated otherwise. Cite this article:
Latvia Facts for Kids. Kiddle Encyclopedia.