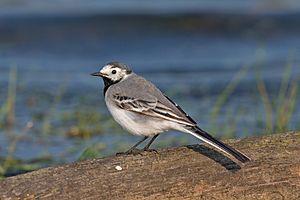 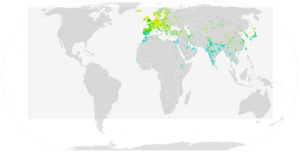 The white wagtail (Motacilla alba) is a species of bird.

They are not an endangered species. They have a stable population of between 130 million and 300 million adult birds. They are found in Europe, Asia and northern Africa. It is possible that climate change is affecting their migration.

The pied wagtail is a subspecies of the white wagtail.They are 18cm long, have a wingspan of between 25 and 30cm and weigh between 17 and 25grams.

All content from Kiddle encyclopedia articles (including the article images and facts) can be freely used under Attribution-ShareAlike license, unless stated otherwise. Cite this article:
White wagtail Facts for Kids. Kiddle Encyclopedia.