John Gould FRS (14 September 1804 – 3 February 1881) was an English ornithologist and bird artist. He published a number of monographs on birds, illustrated by plates that he produced with the assistance of his wife, Elizabeth Gould, and several other artists including Edward Lear, Henry Constantine Richter, Joseph Wolf and William Matthew Hart. He has been considered the father of bird study in Australia and the Gould League in Australia is named after him. His identification of the birds now nicknamed "Darwin's finches" played a role in the inception of Darwin's theory of evolution by natural selection. Gould's work is referenced in Charles Darwin's book, On the Origin of Species.

Gould was born in Lyme Regis the first son of a gardener. He and the boy probably had a scanty education. Shortly afterwards his father obtained a position on an estate near Guildford, Surrey, and then in 1818 Gould became foreman in the Royal Gardens of Windsor. He was for some time under the care of J. T. Aiton, of the Royal Gardens of Windsor. The young Gould started training as a gardener, being employed under his father at Windsor from 1818 to 1824, and he was subsequently a gardener at Ripley Castle in Yorkshire. He became an expert in the art of taxidermy. In 1824 he set himself up in business in London as a taxidermist, and his skill helped him to become the first Curator and Preserver at the museum of the Zoological Society of London in 1827.

A number of animals have been named after Gould, including those in English such as the Gould's mouse.

Birds named after Gould include: 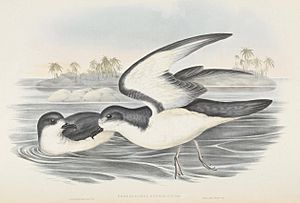 A visit to Gould in his old age provided the inspiration for John Everett Millais's painting The Ruling Passion.

The Gould League, founded in Australia in 1909, was named after him. This organisation gave many Australians their first introduction to birds, along with more general environmental and ecological education. One of its major sponsors was the Royal Australasian Ornithologists Union.

In 1976 he was honoured on a postage stamp, bearing his portrait, issued by Australia Post. In 2009, a series of birds from his Birds of Australia, with paintings by H C Richter, were featured in another set of stamps.

All content from Kiddle encyclopedia articles (including the article images and facts) can be freely used under Attribution-ShareAlike license, unless stated otherwise. Cite this article:
John Gould Facts for Kids. Kiddle Encyclopedia.