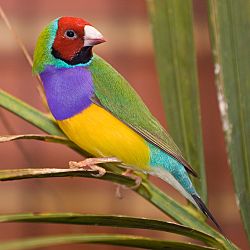 The Gouldian finch (Erythrura gouldiae), also known as the Lady Gouldian finch, Gould's finch or the rainbow finch, is a species of passerine bird which is native to Australia. Both sexes are brightly coloured with black, green, yellow and red markings. The birds are found across northern Australia in the Northern Territory, Western Australia and Queensland. The species are listed as near-threatened.

The Gouldian finch was described by British ornithological artist John Gould in 1844 as Amadina gouldiae. It was named in honour of Gould's late wife Elizabeth.

All content from Kiddle encyclopedia articles (including the article images and facts) can be freely used under Attribution-ShareAlike license, unless stated otherwise. Cite this article:
Gouldian finch Facts for Kids. Kiddle Encyclopedia.