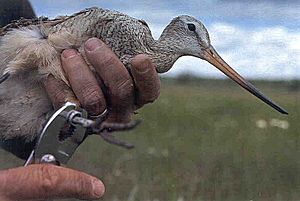 A marbled godwit being ringed for studies on bird migration 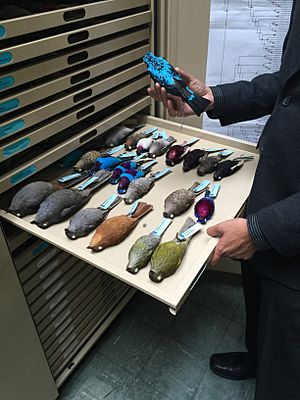 A collection of bird skins

Ornithology is the study of birds. A person who studies birds is called an ornithologist.

The science of ornithology has a long history and studies on birds have helped develop several key concepts in evolution, behaviour and ecology such as the definition of species, the process of speciation, instinct, learning, ecological niches, guilds, island biogeography, phylogeography, and conservation.

Most modern biological theories apply across taxonomic groups, and the number of professional scientists who identify themselves as "ornithologists" has therefore declined. A wide range of tools and techniques is used in ornithology, both inside the laboratory and out in the field, and innovations are constantly made.

All content from Kiddle encyclopedia articles (including the article images and facts) can be freely used under Attribution-ShareAlike license, unless stated otherwise. Cite this article:
Ornithology Facts for Kids. Kiddle Encyclopedia.