Ichthyology, also known as fish science, is the branch of zoology devoted to the study of fish. This includes bony fish (Osteichthyes), cartilaginous fish (Chondrichthyes), and jawless fish (Agnatha). While a large number of species have been discovered, approximately 250 new species are officially described by science each year. According to FishBase, 33,400 species of fish had been described by October 2016. 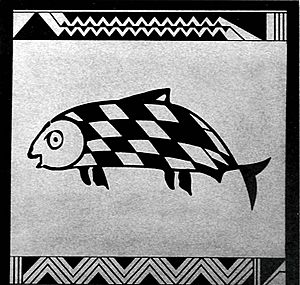 Fish represent approximately 8% of all figurative depictions on Mimbres pottery.

Deckblatt zu einem der Hauptwerke von Peter Artedi.jpg|thumb|Frontipiece from Ichthyologia, sive Opera Omnia de Piscibus by Peter Artedi The study of fish dates from the Upper Paleolithic Revolution. It receives its origins from human's desire to feed, clothe, and equip themselves with useful implements. The earliest ichthyologists were hunters and gatherers who had learned how to obtain the most useful fish, where to obtain them in abundance, and at what times they might be the most available". Early cultures manifested these insights in abstract and identifiable artistic expressions.

A person who studies fish is called an ichthyologist.

All content from Kiddle encyclopedia articles (including the article images and facts) can be freely used under Attribution-ShareAlike license, unless stated otherwise. Cite this article:
Ichthyology Facts for Kids. Kiddle Encyclopedia.