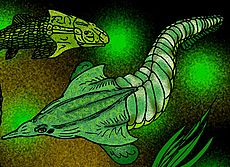 The Agnatha (Greek = 'no jaws') are a superclass of vertebrates. They are jawless fish.

The Agnatha as a whole may be paraphyletic. This means it is a convenient holdall term, which does not follow the rules of cladistics. For example, most extinct agnathans belong to the stem group (ancestral group) of gnathostomes. But according to the rules, one sister group should not contain ancestors of another sister group,

The living Agnatha (lampreys and hagfish) are known as cyclostomes. Recent molecular data from rRNA, and from mtDNA, show that these living agnathans are monophyletic. There are about 100 species. Hagfish are vertebrates but do not have vertebrae. It is believed that they lost their vertebrae during their lifestyle adaptations.

The lifestyle of the lamprey (an ectoparasite on other fish) and hagfish (a scavenger) means that they are not typical of the fossil groups, which were free-swimming and often armoured.

Agnathans do not have jaws, and have a cartilaginous skeleton. There is a notochord in both larvae and adults. They do not have paired fins. They have seven or more paired gill pouches.

Agnatha have no identifiable stomach and are cold-blooded. The heart is simple, with two chambers.

There is a light-sensitive pineal eye. Fertilization and development of young are both outside the body, and there is no parental care.

The oldest fossil agnathans are found in Cambrian deposits.

Many Ordovician, Silurian, and Devonian agnathans were armoured with heavy bony-spiky plates. The first armoured agnathans were the Ostracoderms ("shell-skinned"). By the upper Silurian the agnathans had reached the high point of their evolution. They declined in the Devonian and never recovered.

All content from Kiddle encyclopedia articles (including the article images and facts) can be freely used under Attribution-ShareAlike license, unless stated otherwise. Cite this article:
Agnatha Facts for Kids. Kiddle Encyclopedia.