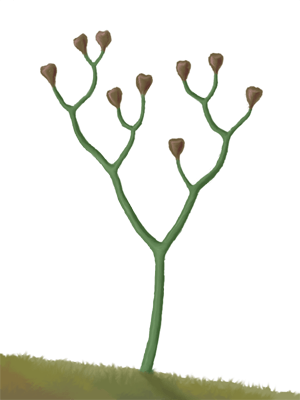 The Silurian was the period from the end of the Ordovician, about 443.4 million years ago (mya) to the beginning of the Devonian period, about 419 mya.

As with other geologic periods, the rock beds that define the period's start and end are well identified, but the exact dates are uncertain by several million years. The base of the Silurian is set at a major extinction when 60% of marine species were wiped out, the Ordovician-Silurian extinction events.

The Silurian was the first period to see macrofossils of biota on land, in the form of moss forests along lakes and streams as well as millipedes and scorpions colonizing the land later in the period. The fossil record of Sea Scorpions reached it's greatest extent in the middle silurian,about 430 million years ago.

The first fossil records of vascular plants, that is, land plants with tissues that carry food, appeared in the second half of the Silurian period. The earliest known representatives of this group are the Cooksonia (mostly from the northern hemisphere) and Baragwanathia (from Australia). A primitive Silurian land plant with xylem and phloem but no differentiation in root, stem or leaf, was much-branched Psilophyton. This plant reproducied by spores and respired through stomata on every surface, and probably photosynthesizing in every tissue exposed to light.

Some evidence suggests the presence of primitive predatory arachnids and myriapods in Late Silurian rocks. Predatory invertebrates would indicate that simple food webs were in place that included non-predatory prey animals.

All content from Kiddle encyclopedia articles (including the article images and facts) can be freely used under Attribution-ShareAlike license, unless stated otherwise. Cite this article:
Silurian Facts for Kids. Kiddle Encyclopedia.