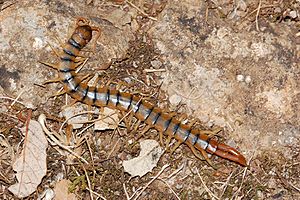 The Myriapoda is a subphylum of arthropods. It contains the millipedes, centipedes, and others. The group has 13,000 species, all of which are terrestrial. Their name suggests they have many legs. In fact one has over 750 legs (Illacme plenipes), but some have fewer than ten legs.

The fossil record of myriapods goes back into the late Silurian, though molecular evidence suggests they diversified in the Cambrian period. Cambrian fossils do exist which look like myriapods.

Myriapods have a single pair of antennae and, in most cases, simple eyes. The mouthparts lie on the underside of the head. There is an "epistome" and labrum forming the upper lip, and a pair of maxillae forming the lower lip. A pair of mandibles lie inside the mouth. Myriapods breathe through spiracles that connect to a tracheal system similar to that of insects.

There are four classes of living myriapods, Chilopoda (centipedes), Diplopoda (millipedes), Pauropoda and Symphyla. There is a total of around 12,000 living species. While each of these groups of myriapods is believed to be monophyletic, relationships among them are less certain. 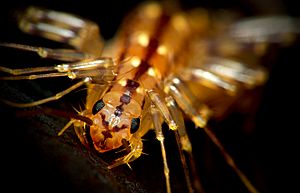 Centipedes make up the order Chilopoda. They are fast, predatory and venomous, hunting mostly at night. There are around 3,300 species, ranging from the diminutive Nannarup hoffmani (less than half an inch in length, c. 12 mm) to the giant Scolopendra gigantea, which may exceed 30 centimetres (12 in). 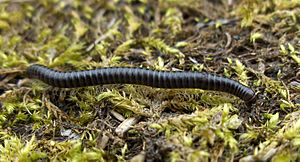 Millipedes are the class Diplopoda, where most segments appear to have two pairs of legs. This happened because each pair of body segments fused (joined) into a single unit, which gives them the appearance of having two pairs of legs per segment.

They are slower than centipedes, and feed on leaf litter and detritus. Around 8,000 species have been described, which may represent less than a tenth of the true global millipede diversity. One species, Illacme plenipes has the greatest number of legs of any animal, with 750. Millipedes typically have between 36 and 400 legs. Pill millipedes are much shorter, and are capable of rolling up into a ball, like pillbugs.

About 200 species of symphylans are known worldwide. They resemble centipedes but are smaller and translucent. Many spend their lives as soil infauna, but some live arboreally. Juveniles have six pairs of legs, but, over a lifetime of several years, add an additional pair at each moult so that the adult instar has twelve pairs of legs.

Pauropoda is another small group of small myriapods. They are typically 0.5–2.0 mm long and live in the soil on all continents except Antarctica. Over 700 species have been described. They are believed to be the sister group to millipedes, and have the dorsal tergites fused across pairs of segments, similar to the more complete fusion of segments seen in millipedes.

Arthropleuridea were ancient myriapods that are now extinct. The most famous members are from the genus Arthropleura, which was a giant, probably herbivorous, animal that could be up to 3 metres (9.8 ft) long. Arthropleuridea may be a division of the millipedes.

All content from Kiddle encyclopedia articles (including the article images and facts) can be freely used under Attribution-ShareAlike license, unless stated otherwise. Cite this article:
Myriapoda Facts for Kids. Kiddle Encyclopedia.