Insects have many different antennal shapes.

Antennae (singular antenna) are paired feelers (appendages) connected to the front segments of crustaceans and insects. They are found on the first two segments of the head. The smaller pair is known as antennules.

Antennae are jointed and extend forward from the head. They are sensory organs. The organ may sense touch, air motion, heat, vibration (sound), and especially olfaction (smell) or gustation (taste).

Antennal shape in the Lepidoptera from C. T. Bingham (1905)

Antenna are the primary olfactory sensors of an insect and are accordingly well-equipped with a wide variety of sensilla (singular : sensillum). Paired, mobile, and segmented, they are located between the eyes on the forehead. Embryologically, they represent the appendages of the second head segment.

All insects have antenna though these may be greatly reduced in the larval forms. Amongst the non-insect classes of Hexapoda, Collembola and Diplura have antenna, but Protura do not. 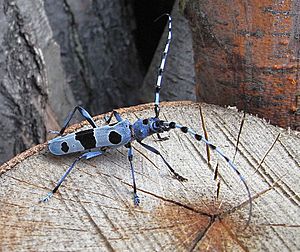 Large antennae on a longhorn beetle

The three basic segments of the typical insect antenna are the scape (base), the pedicel (stem), and finally the flagellum, which often comprises many units known as flagellomeres.

Muscles are only present in the two first segments, the scape and pedicel. The scape is surrounded by a membranous region of the head. It pivots on a single marginal point called the antennifer, allowing it to move in any direction.

The number of flagellomeres can vary greatly, and is often of diagnostic importance. True flagellomeres have a membranous articulation between them, but in many insects, especially the more primitive groups, the flagellum is entirely or partially composed of a flexible series of small annuli, which are not true flagellomeres.

In the groups with more uniform antennae (for example: Diplopoda), all segments are called antennomeres. Some groups have a simple or variously modified apical or subapical bristle called an arista (this may be especially well-developed in various Diptera).

Olfactory receptors on the antennae bind to odour molecules, including pheromones. The neurons that possess these receptors signal this binding by sending action potentials down their axons to the antennal lobe in the brain. From there, neurons in the antennal lobes connect to mushroom bodies that identify the odour. The sum of the electrical potentials of the antenna to a given odor can be measured using an electroantennogram. 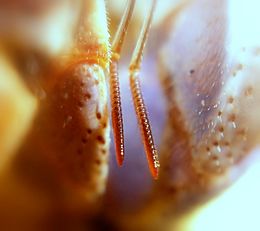 Crustaceans bear two pairs of antennae. The first pair are uniramous and are often referred to as antennules, while the second pair are biramous, meaning that each antenna is composed of two parts, joined at their base . In most adults, the antenna are sensory organs, but they are used by the nauplius larva for swimming. In some groups of crustaceans, such as the spiny lobsters and slipper lobsters, the second antennae are enlarged, while in others, such as crabs, the antennae are reduced in size.

All content from Kiddle encyclopedia articles (including the article images and facts) can be freely used under Attribution-ShareAlike license, unless stated otherwise. Cite this article:
Antenna (biology) Facts for Kids. Kiddle Encyclopedia.