Spiny lobsters, also known as langustas, langouste, or rock lobsters, are a family (Palinuridae) of about 60 species of achelate crustaceans, in the Decapoda Reptantia. Spiny lobsters are also, especially in Australia, New Zealand, Ireland, South Africa, and the Bahamas, called crayfish, sea crayfish, or crawfish ("kreef" in South Africa), terms which elsewhere are reserved for freshwater crayfish.

The furry lobsters (e.g. Palinurellus) were previously separated into a family of their own, the Synaxidae, but are usually considered members of the Palinuridae. The slipper lobsters (Scyllaridae) are their next-closest relatives, and these two or three families make up the Achelata. Genera of spiny lobsters include Palinurus and a number of anagrams thereof: Panulirus, Linuparus, etc. (Palinurus was also a helmsman in Virgil's Æneid.) In total, 12 extant genera are recognised, containing around 60 living species: 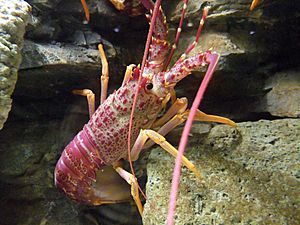 Although they superficially resemble true lobsters in terms of overall shape and having a hard carapace and exoskeleton, the two groups are not closely related. Spiny lobsters can be easily distinguished from true lobsters by their very long, thick, spiny antennae, by the lack of chelae (claws) on the first four pairs of walking legs, although the females of most species have a small claw on the fifth pair, and by a particularly specialized larval phase called phyllosoma. True lobsters have much smaller antennae and claws on the first three pairs of legs, with the first being particularly enlarged.

Spiny lobsters typically have a slightly compressed carapace, lacking any lateral ridges. Their antennae lack a scaphocerite, the flattened exopod of the antenna. This is fused to the epistome (a plate between the labrum and the basis of the antenna). The flagellum, at the top of the antenna, is stout, tapering, and very long. The ambulatory legs (pereopods) end in claws (chelae).

The fossil record of spiny lobsters has been extended by the discovery in 1995 of a 110-million-year-old fossil near El Espiñal in Chiapas, Mexico. Workers from the National Autonomous University of Mexico have named the fossil Palinurus palaecosi, and report that it is closest to members of the genus Palinurus currently living off the coasts of Africa. 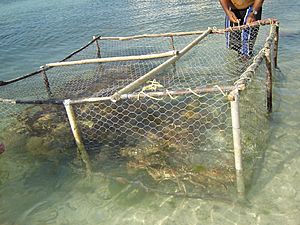 Fishing for Panulirus argus in Venezuela

Spiny lobsters are found in almost all warm seas, including the Caribbean and the Mediterranean Sea, but are particularly common in Australasia, where they are referred to commonly as crayfish or sea crayfish (Jasus edwardsii), and in South Africa (Jasus lalandii).

Spiny lobsters tend to live in crevices of rocks and coral reefs, only occasionally venturing out at night to seek snails, clams, sea-hares, crabs, or sea urchins to eat. Sometimes, they migrate in very large groups in long files of lobsters across the sea floor. These lines may be more than 50 lobsters long. Spiny lobsters navigate using the smell and taste of natural substances in the water that change in different parts of the ocean. It was recently discovered that spiny lobsters can also navigate by detecting the Earth's magnetic field. They keep together by contact, using their long antennae. Potential predators may be deterred from eating spiny lobsters by a loud screech made by the antennae of the spiny lobsters rubbing against a smooth part of the exoskeleton. Spiny lobsters usually exhibit the social habit of being together. However recent studies indicate that healthy lobsters move away from infected ones, leaving the diseased lobsters to fend for themselves.

Like true lobsters, spiny lobsters are edible and are an economically significant food source; they are the biggest food export of the Bahamas, for instance.

Many spiny lobsters produce rasping sounds to repel predators by rubbing the "plectrum" at the base of the spiny lobster's antennae against a "file". The noise is produced by frictional vibrations - sticking and slipping, similar to rubber materials sliding against hard surfaces. While a number of insects use frictional vibration mechanisms to generate sound, this particular acoustic mechanism is unique in the animal kingdom. Significantly, the system does not rely on the hardness of the exoskeleton, as many other arthropod sounds do, meaning that the spiny lobsters can continue to produce the deterrent noises even in the period following a moult when they are most vulnerable. The stridulating organ is present in all but three genera in the family (Jasus, Projasus, and the furry lobster Palinurellus), and its form can distinguish different species.

All content from Kiddle encyclopedia articles (including the article images and facts) can be freely used under Attribution-ShareAlike license, unless stated otherwise. Cite this article:
Spiny lobster Facts for Kids. Kiddle Encyclopedia.