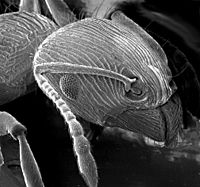 The head of an ant: Chitin Type

An exoskeleton supports and protects an animal's body from outside and not like the internal endoskeleton-of, for example human beings - from inside.

Many invertebrate animals (such as shelled mollusks) have exoskeletons in the sense of external hard parts. But if one speaks of an exoskeleton one mostly means that of arthropods (i.e. insects, spiders, myriapods and crustaceans).

Exoskeletons contain rigid and resistant components that fulfil a set of functional roles including protection, excretion, sensing, support, feeding and (for terrestrial organisms) acting as a barrier against desiccation. Exoskeletons first appeared in the fossil record about 550 million years ago, and their evolution has been seen as critical as a driving role in the Cambrian explosion of animals that took place subsequent to this time. 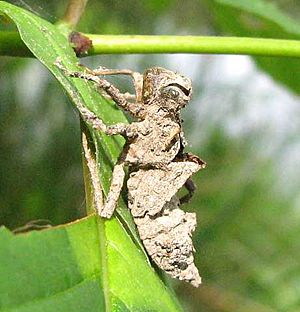 The discarded exoskeleton (exuviae) of a dragonfly nymph

Exoskeletons contain rigid and resistant components that fulfill a set of functional roles including protection, excretion, sensing, support, feeding and acting as a barrier against desiccation in terrestrial organisms. Exoskeletons have a role in defense from pests and predators, support, and in providing an attachment framework for musculature.

Exoskeletons contain chitin; the addition of calcium carbonate makes them harder and stronger. Ingrowths of the arthropod exoskeleton known as apodemes serve as attachment sites for muscles. These structures are composed of chitin, and are approximately six times as strong and twice as stiff as vertebrate tendons. Similar to tendons, apodemes can stretch to store elastic energy for jumping, notably in locusts. 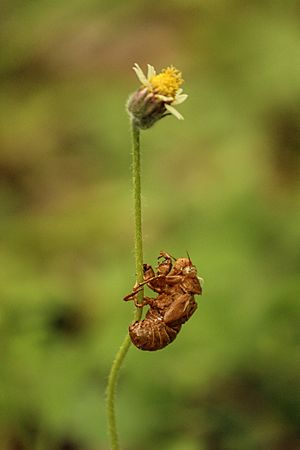 Many different species produce exoskeletons, which are composed of a range of materials. Bone, cartilage, or dentine is used in the Ostracoderm fish and turtles. Chitin forms the exoskeleton in arthropods including insects, arachnids such as spiders, crustaceans such as crabs and lobsters, and in some fungi and bacteria. Calcium carbonates constitute the shells of molluscs, brachiopods, and some tube-building polychaete worms. Silica forms the exoskeleton in the microscopic diatoms and radiolaria. One species of mollusc, the scaly-foot gastropod, even makes use of the iron sulfides greigite and pyrite.

Some organisms, such as some foraminifera, agglutinate exoskeletons by sticking grains of sand and shell to their exterior. Contrary to a common misconception, echinoderms do not possess an exoskeleton, as their test is always contained within a layer of living tissue.

Since exoskeletons are rigid, they present some limits to growth. Organisms with open shells can grow by adding new material to the aperture of their shell, as is the case in snails, bivalves and other molluscans. A true exoskeleton, like that found in arthropods, must be shed (moulted) when it is outgrown. A new exoskeleton is produced beneath the old one. As the old one is shed, the new skeleton is soft and pliable. The animal will pump itself up to expand the new shell to maximal size, then let it harden. When the shell has set, the empty space inside the new skeleton can be filled up as the animal eats. Failure to shed the exoskeleton once outgrown can result in the animal being suffocated within its own shell, and will stop subadults from reaching maturity, thus preventing them from reproducing. This is the mechanism behind some insect pesticides, such as Azadirachtin. 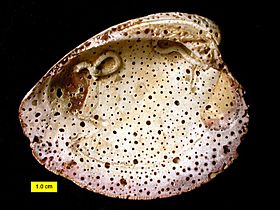 Borings in exoskeletons can provide evidence of animal behavior. In this case, boring sponges attacked this hard clam shell after the death of the clam, producing the trace fossil Entobia.

Exoskeletons, as hard parts of organisms, are greatly useful in assisting preservation of organisms, whose soft parts usually rot before they can be fossilized. Mineralized exoskeletons can be preserved "as is", as shell fragments, for example. The possession of an exoskeleton also permits a couple of other routes to fossilization. For instance, the tough layer can resist compaction, allowing a mold of the organism to be formed underneath the skeleton, which may later decay. Alternatively, exceptional preservation may result in chitin being mineralized, as in the Burgess Shale, or transformed to the resistant polymer keratin, which can resist decay and be recovered.

However, our dependence on fossilized skeletons also significantly limits our understanding of evolution. Only the parts of organisms that were already mineralized are usually preserved, such as the shells of molluscs. It helps that exoskeletons often contain "muscle scars", marks where muscles have been attached to the exoskeleton, which may allow the reconstruction of much of an organism's internal parts from its exoskeleton alone. The most significant limitation is that, although there are 30-plus phyla of living animals, two-thirds of these phyla have never been found as fossils, because most animal species are soft-bodied and decay before they can become fossilized.

Mineralized skeletons first appear in the fossil record shortly before the base of the Cambrian period, 550 million years ago. The evolution of a mineralized exoskeleton is seen by some as a possible driving force of the Cambrian explosion of animal life, resulting in a diversification of predatory and defensive tactics. However, some Precambrian (Ediacaran) organisms produced tough outer shells while others, such as Cloudina, had a calcified exoskeleton. Some Cloudina shells even show evidence of predation, in the form of borings.

All content from Kiddle encyclopedia articles (including the article images and facts) can be freely used under Attribution-ShareAlike license, unless stated otherwise. Cite this article:
Exoskeleton Facts for Kids. Kiddle Encyclopedia.