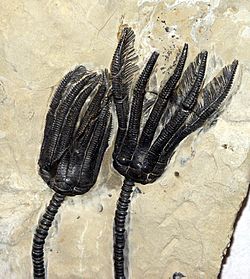 Echinoderms are a successful phylum of marine animals. They include starfish, brittle stars, sea urchins, sea cucumbers and their relatives.

Echinoderms have these features:

Echinoderms live in all parts of the ocean, but mostly on the sea floor. Some are filter feeders, and others (starfish) are important predators of molluscs and other shell-fish. They are extremely common near the shore, and on reefs.

They have a long and abundant fossil record. This phylum appeared in the early Cambrian period; it contains about 7,000 living and 13,000 extinct species. The four or five main groups are called sub-phyla by some authorities, and classes by others.

Echinodermata is the largest animal phylum which is entirely marine: no animals in this group live on land or in fresh or brackish water.

For many purposes it is better to use the following classification. It is easier to learn and understand, and is based more on the living forms.p19

Only with the crinoids is it necessary to deal with the fossil forms, because the stalked crinoids were so important on the Palaeozoic sea floors. 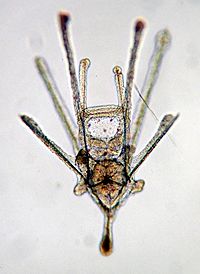 All echinoderms have fivefold radial symmetry in their body at some stage of life. The holothurians have bilateral symmetry as adults, and do not have so much of a skeleton as other groups.

Echinoderms have a hydraulic water vascular system. This network of fluid-filled canals moves and feeds the animal, and allows gas exchange. There is also a complete digestive tube. They have a simple radial nervous system that consists of a modified nerve net. There are nerve rings with radiating nerves around the mouth extending into each arm. The branches of these nerves coordinate the movements of the animal. Echinoderms have no brain, although some do have ganglia. They usually move with their tube feet, but brittle stars use their arms to pull against rocks. Some feather stars and sea cucumbers can swim.

The sexes are usually separate. Sexual reproduction typically consists of releasing eggs and sperm into the water, with fertilization taking place externally. Their larvae are planktonic.

Many echinoderms have remarkable powers of regeneration. A starfish arm cut off will regenerate. A section as small as a single arm, with some central disk and neural tissue, can regenerate the whole organism.

Most of the adults have radial symmetry. If they are not sessile or attached, they are at least benthic (bottom-dwellers). In contrast, echinoderm larvae are planktonic, and have bilateral symmetry.p119 Echinoderm larvae are ciliated free-swimming organisms that have a bilaterally symmetry rather like embryonic chordates. The first stage in all groups except the crinoids is the dipleurula, which has a row of cilia winding round its body. All the groups have second and third stage larvae. The larvae grow, and are carried away from their parents.

Later, the adult body grows into a radial form, with the body arranged in five parts around a central axis. This means they often have a star-shaped pattern.

There is no geological evidence about the origin of echinoderms. The first undoubted fossils in the Lower Cambrian are already well developed, and fall into five or six different groups. Arkarua, from the Ediacaran, is thought to be an echinoderm. Tribrachidium is another possible, from the same period. On general biological grounds, it seems that echinoderms, and some related phyla, may have been derived from worm-like ancestors.p311

Of all invertebrate phyla, the echinoderms are the closest relatives to the chordata, that is, animals who have spinal cord, such as vertebrates. With the chordates and hemichordates, echinoderms are deuterostomes, one of the two major divisions of the animal kingdom

All content from Kiddle encyclopedia articles (including the article images and facts) can be freely used under Attribution-ShareAlike license, unless stated otherwise. Cite this article:
Echinoderm Facts for Kids. Kiddle Encyclopedia.