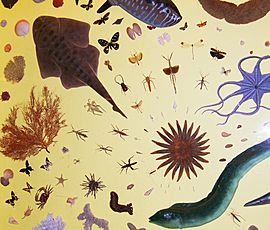 A selection of animals showing the range of possible symmetries, including both radial and bilateral body plans.

Symmetry in biology is about the overall shape of the body and its parts. The body plans of most multicellular organisms have some form of symmetry, radial symmetry, bilateral symmetry or spherical symmetry. A few have no symmetry, and are asymmetric.

In nature and biology, symmetry is approximate. For example, plant leaves, which are more or less symmetrical, will rarely match up exactly when folded in half.

There are three basic forms:

In nature and biology, symmetry is approximate. For example, plant leaves, while considered symmetric, will rarely match up exactly when folded in half.

When symmetry is not complete or not present at all.

All content from Kiddle encyclopedia articles (including the article images and facts) can be freely used under Attribution-ShareAlike license, unless stated otherwise. Cite this article:
Symmetry (biology) Facts for Kids. Kiddle Encyclopedia.