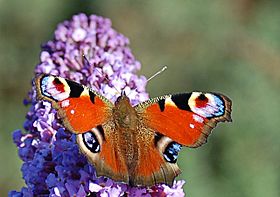 Deimatic defence is when prey startle predators and so get time to escape. The predator gets a shock, and often jumps back when startled. Many prey use this tactic when a predator gets close. It is an anti-predator defence.

This method is a fake, where a real aposematic warning signal is genuine. Many species of frog put on warning displays; but only some of these species do have poison glands.

Displays are classified as deimatic or aposematic by the responses of the animals that see them.

In the second case, the behaviour is both deimatic and aposematic. It startles the predator, and the display truly indicates the prey is bad to eat.

All content from Kiddle encyclopedia articles (including the article images and facts) can be freely used under Attribution-ShareAlike license, unless stated otherwise. Cite this article:
Deimatic defence Facts for Kids. Kiddle Encyclopedia.