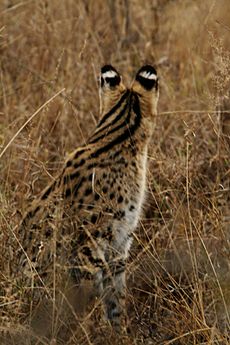 A serval from behind, with ocelli on the back of its ears. Kits can see their mother as she moves in the long grass

An eye-spot (or ocellus) is an eye-like marking on the body of an animal. They are found on butterflies, reptiles, felids, birds and fish.

Eye-spots may be a form of mimicry: the spot looks like the eye of a larger animal. Its function may be to draw a predator's attention away from the most vulnerable body parts; or to look like an unpleasant or dangerous animal.

In larger animals, eyespots may play a role in intraspecies communication or courtship – the best-known example is probably the eyespots on a peacock's display feathers.

There is evidence that eyespots in butterflies are anti-predator defences. Some are deimatic displays to distract, startle or scare off predators, or at least to deflect attacks away from vital body parts. Butterfly eyespots may also play a role in mate recognition and sexual selection, like the eyespots on larger organisms.

All content from Kiddle encyclopedia articles (including the article images and facts) can be freely used under Attribution-ShareAlike license, unless stated otherwise. Cite this article:
Eye-spot (mimicry) Facts for Kids. Kiddle Encyclopedia.