The serval is a wild cat native to Africa. It is rare in North Africa and the Sahel, but widespread in sub-Saharan countries except rainforest regions. On the IUCN Red List it is listed as Least Concern. 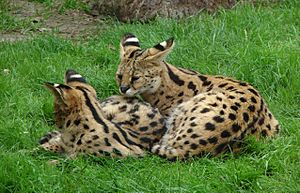 The serval has the longest legs of all cats, relative to its size. Not only can it run fast, but it is an amazing jumper: two to three metres from a standing start.

Its length as an adult is about 32 inches (body) and 16 inches (tail). It weighs about four pounds. There are a number of subspecies, and its geographical range is from the Cape of South Africa to Algeria, wherever the circumstances are right for it.

It is lightly built, with very large ears and long legs. The back of the ears is black with a big white spot, and the tip of the tail is black. These signs serve as signals to other servals, including kittens. 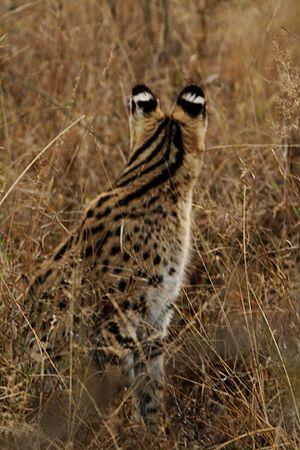 A serval seen from behind: the white markings on the ears (ocelli) can be seen by following kittens

Like most cats, the serval is a solitary animal. The serval is active in the day as well as at night; activity might peak in early morning, around twilight and at midnight. Servals might be active for a longer time on cool or rainy days. During the hot midday, they rest or groom themselves in the shade of bushes and grasses.

Servals remain cautious of their vicinity. Servals walk as much as 2 to 4 kilometres (1 1⁄4 to 2 1⁄2 miles) every night. Servals will often use special trails to reach certain hunting areas. A solitary animal, there is little social interaction among servals except in the mating season. The only long-lasting bond appears to be of the mother and her cubs, which leave their mother only when they are a year old.

The serval is vulnerable to hyaenas and wild dogs. It will seek cover to escape their view, and, if the predator is very close, immediately flee in long leaps, changing its direction frequently and with the tail raised. The serval is an efficient, though not frequent, climber; an individual was observed to have climbed a tree to a height of more than 9 metres (30 feet) to escape dogs. Like many cats, the serval is able to purr; it also has a high-pitched chirp, and can hiss, cackle, growl, grunt and meow. 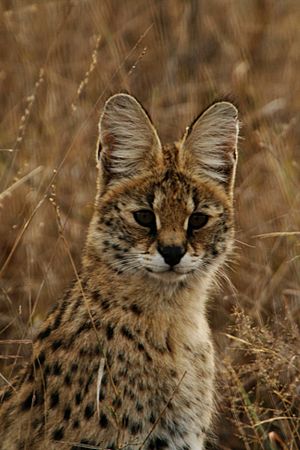 A serval from the Sabi Sands area of South Africa. The large ears help to hear small prey in the grass

In North Africa, the serval is known only from Morocco and has been reintroduced in Tunisia, but is feared to be extinct in Algeria. It inhabits semi-arid areas and cork oak forests close to the Mediterranean Sea, but avoids rainforests and arid areas. It occurs in the Sahel, and is widespread in Southern Africa. It prefers areas with cover, such as reeds and tall grasses, proximity to water bodies such as wetlands and savannahs. It inhabits grasslands, moorlands and bamboo thickets at high altitudes up to 3,800 m (12,500 ft) on Mount Kilimanjaro.

The serval is nocturnal, and hunts mostly at night. The serval is an opportunistic predator whose diet includes rodents, hares, hyraxes, birds, reptiles, insects, fish, and frogs.

As part of its adaptations for hunting in the savannas, the serval's long legs help it achieve a top speed of 80 kilometres per hour (50 mph), and has large ears with acute hearing. Its long legs and neck allow the serval to see over tall grasses, while its ears are used to detect prey, even those burrowing underground.

Servals have been known to dig into burrows in search of underground prey, and to leap 2 to 3 metres (7 to 10 ft) into the air to grab birds in flight. Using its spectacular jumping ability, the serval leaps into the air and bats the bird with its front paws. When the bird is on the ground, it bites its neck, killing it. 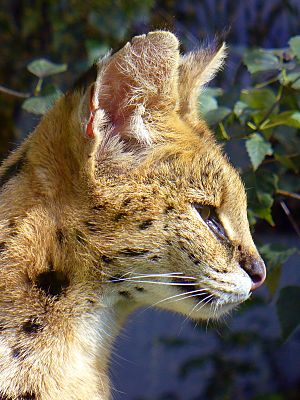 Serval in a zoo

Gestation lasts for two to three months, following which a litter of one to four kittens is born. Births take place in secluded areas, for example in dense vegetation or burrows abandoned by aardvarks and porcupines. Blind at birth, newborn weigh nearly 250 grams (9 oz) and have soft, woolly hair (greyer than in adults) and unclear markings.

The eyes open after nine to thirteen days. Weaning begins after a month of birth; the mother brings small kills to her kittens and calls out to them as she approaches the "den". A mother with young kittens rests for a notably lesser time and has to spend almost twice the time and energy for hunting than do other servals.

If disturbed, the mother will shift her kittens one by one to a more secure place. Kittens eventually start accompanying their mother to hunts. At around six months, they acquire their permanent canines and begin to hunt themselves. The mother will chase her male offspring away as soon as they can hunt, at about 8 to 10 months of age, but will let females stay with her for a little longer, up to a year. They may reach maturity from 12 to 25 months of age.

Life expectancy is about 10 years in the wild, and up to 20 years in captivity. 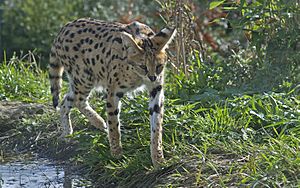 A major threat to the survival of the serval include the degradation of wetlands and grasslands. Trade of serval skins, though on the decline, still occurs in countries such as Benin and Senegal. In western Africa, the serval has significance in traditional medicine. Pastoralists often kill servals to protect their animals, though servals generally do not prey upon livestock.

Servals occur in several protected areas across its range. Hunting of servals is prohibited in many of these areas. 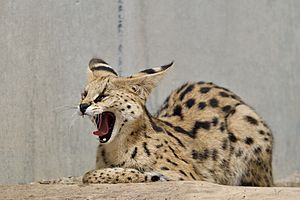 The association of servals with human beings dates to the time of Ancient Egypt. Servals are depicted as gifts or traded objects from Nubia in Egyptian art. Like many other species of felid, servals are occasionally kept as pets, although their wild nature means that ownership of servals is regulated in most countries.

On 7 April 1986, a healthy hybrid kitten between a male serval and a female domestic cat was born; this kitten was larger than a typical domestic kitten and resembled its father in its coat pattern. It appeared to have inherited a few domestic traits, such as tameness, from its mother. The hybrid cat may have a doglike habit of following its owner about, and can be a good swimmer. Over the years, the savannah cat, a hybrid between domestic cat and serval, has gained popularity as a pet.

All content from Kiddle encyclopedia articles (including the article images and facts) can be freely used under Attribution-ShareAlike license, unless stated otherwise. Cite this article:
Serval Facts for Kids. Kiddle Encyclopedia.