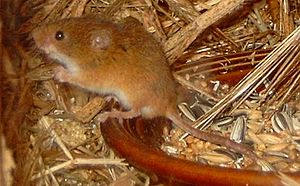 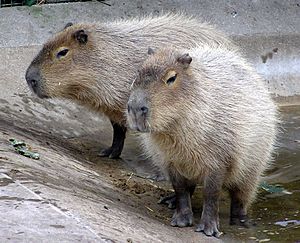 Rodents are a very successful group of mammals. They form the order Rodentia.

They have four incisors. These keep growing, and must be kept worn down by gnawing (eroding teeth by grinding them on something hard); this is the origin of the name, from the Latin rodere, "to gnaw", and dent, "tooth".

Most rodents are small. Examples of commonly known rodents are mice, rats, chipmunks, and squirrels. Some other small rodents sometimes kept as pets are Guinea pigs, hamsters, and gerbils. Examples of larger rodents are porcupines, beavers, and the largest living rodent, the capybara, which can grow to between 105 and 135 cm (40-55 in) in length, and weigh 35 to 65 kg (75-140 lbs).

Almost half of all mammal species are rodents. More examples of rodents are voles, prairie dogs, groundhogs, and chinchillas.

Rabbits, hares, and pikas are sometimes called rodents, because they also have teeth that keep growing. But in 1912 biologists decided to put them in a new, separate order, Lagomorpha, because they have two extra incisors in their upper jaw.

Shrews are sometimes called rodents, because they look like mice, but that is not correct. They are in the order Insectivora. 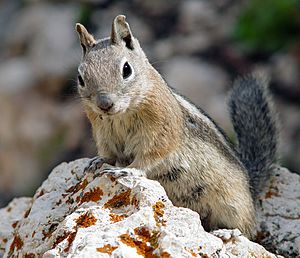 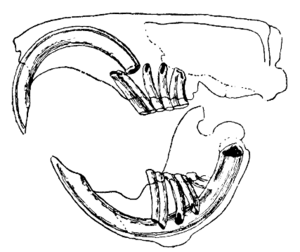 Typical rodent tooth system: the front surface of the incisors is hard enamel, forming a sharp ridge above the softer dentine as the teeth wear down.

Rodents are generally small animals, most species weighing less than 100 g (3.5 oz). The largest species, the capybara, can weigh as much as 66 kg (146 lb). Rodents typically have squat bodies and short limbs. The fore-limbs usually have five digits, including a sometimes vestigial thumb, while the hind-limbs may have three to five digits. The elbow gives the fore-arms great flexibility. The majority of species are plantigrade, walking on both the palms and soles of their feet, and have claw-like nails. In general, rodents are not well adapted for running but a few species, like the agouti are fleet-footed, being digitigrade and having hoof-like nails. Kangaroo mice and jerboas can hop at 48 km/h (30 mph). Semi-aquatic species like the beaver have webbed feet. Squirrels have well-developed dexterity in their front paws. The majority of species have tails, which can be of many shapes and sizes. Some tails are even prehensile, as in the Eurasian harvest mouse. The pelage of the tails can vary from bushy to completely bald. Some species have vestigial tails or no tails at all. In some species, the tail is capable of regeneration if part is broken off.

Rodents generally have well developed senses of smell, hearing and vision. Nocturnal species often have enlarged eyes and some are sensitive to ultraviolet light. Many species have long, sensitive vibrissae for touch or the behavior of "whisking". Some rodents have cheek pouches some of which are lined with fur and the animal can turn them inside out for cleaning. In many species, the tongue cannot reach past the incisors. Rodents have very efficient digestive systems, absorbing nearly 80% of ingested energy. When eating cellulose, the food is softened in the stomach and passed to the fairly large cecum where bacteria reduce it to its digestive carbohydrate elements. The rodent then re-ingests the food from its anus so that the nutrients can be absorbed in the gut. The final result is a hard and dry fecal pellet. In males, the penis contains a bone (baculum) and the testes can be located either abdominally or at the groin. 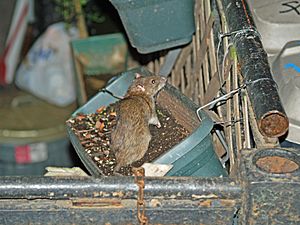 Brown rat in a flower box in New York City. Rodents have thrived in human habitats.

Rodents are one of the most widespread group of mammals. They can be found on every continent expect Antarctica and, along with bats, are the only terrestrial placental mammals that have colonised Australia and New Guinea without human intervention. Humans have also allowed the animals to spread further into some oceanic islands. Rodents have adapted to almost every terrestrial habitat, from cold tundra (where they live under snow) to hot deserts. Some species are arboreal, while others live underground where they built complex burrow systems and others dwell on the surface. Beavers and muskrats are known for being semi-aquatic. Rodents have also thrived in human-created environments such as agricultural and urban areas.

Though some species are common pests for humans, rodents also play important ecological roles. Borruwing rodents may eat the fruiting bodies of fungi and dispose spores through their digestive tracts, allowing the fungi to form symbiotic relationships with the roots of plants (which usually can't survive without them). As such, these rodents may play a role in maintaining healthy forests. Some rodents are considered keystone species and ecosystem engineers in their respective habitats. In the Great Plains of North America, the burrowing activities of prairie dogs play important roles in soil aeration, nutrient redistribution, organic matter levels and water infiltration. They maintain these grassland habitats and some large herbivores like bison and pronghorn prefer to graze near prairie dog colonies due to the increased nutritional quality of forage. Conversely, prairie dogs can also lead to regional and local biodiversity loss, increased seed depredation and the establishment and spread of invasive shrubs. When building their dams and lounges, beavers alter the paths of streams and rivers and allow for the creation of extensive wetland habitats. One study found that engineering by beavers leads to a 33 percent increase in the number of herbaceous plant species in riparian areas. Another study found that beavers increase wild salmon populations. 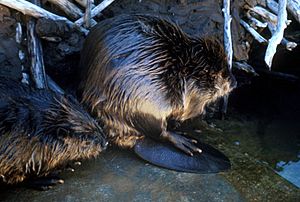 Rodents exhibit a wide range of types of social behavior ranging from the only known mammalian caste systems of some mole rats, the extensive "town" of the colonial prairie dog, through family groups to the independent, solitary life of the edible dormouse.

In the case of the dormouse, males and females live independently, only coming together briefly in the breeding season to mate. Their feeding ranges may overlap but they live in individual nests and feed separately. The female raises the young without any assistance from the male. The pocket gopher is also a solitary animal outside the breeding season, each individual digging a complex tunnel system and maintaining a territory.

Larger rodents tend to live in family units where parents and their offspring live together until such time as the youngsters disperse. Beavers live in extended family units typically with a pair of adults, this year's kits, the previous year's offspring and sometimes older young.

Brown rats usually live in small colonies with up to six females sharing a burrow and one male defending a territory around the burrow. At high population densities, this system breaks down and males show a hierarchial system of dominance with overlapping ranges. Female offspring remain in the colony while male young disperse.

The prairie vole is monogamous and forms a life-long pair bond. Outside the breeding season, prairie voles live in close proximity with others in small colonies. A male is not aggressive towards other males until he has mated, after which time he defends a territory, a female and a nest against other males. The pair huddle together, groom one another, and share nesting and pup-raising responsibilities.

Among the most social of rodents are the ground squirrels, which typically form colonies based on female kinship, males dispersing after weaning and becoming nomadic as adults. Co-operation in ground squirrels varies between species and typically includes making alarm calls, defending territories, sharing food, protecting nesting areas and preventing infanticide. The black-tailed prairie dog forms large towns that may cover many hectares. The burrows do not interconnect but are excavated and occupied by territorial family groups known as coteries. A coterie often consists of an adult male, three or four adult females, several non-breeding yearlings and this year's offspring. Individuals within coteries are friendly with each other, but hostile towards outsiders.

Perhaps the most extreme examples of colonial behavior in rodents are the eusocial naked mole rat(Heterocephalus glaber) and Damaraland mole rat (Fukomys damarensis). These are considered to be the only two eusocial mammals. The naked mole rat lives completely underground and can form colonies of up to eighty individuals. Only one female and up to three males in the colony reproduce, while the rest of the members are smaller, sterile and function as workers. Some individuals are of intermediate size, help with the rearing of the young and can take the place of a reproductive if one of these dies. The Damaraland mole rat is characterized by having a single reproductively active male and female in a colony where the remaining animals are not truly sterile, but only become fertile if they establish a colony of their own.

Using olfaction, rodents are able to recognise close relatives. This allows them to express nepotism (preferential behavior toward their kin) and also avoid inbreeding. This kin recognition is by olfactory cues from urine, faeces and glandular secretions. The main assessment may involve the major histocompatibility complex (MHC), where the degree of relatedness of two individuals is correlated to the MHC genes they have in common. In non-kin communication where more permanent odor markers are required, as at territorial borders, then non-volatile major urinary proteins (MUPs), which function as pheromone transporters, may be additionally used. MUPs may also signal individual identity, with each male house mouse excreting urine containing about a dozen genetically encoded MUPs.

Prairie dogs have complex anti-predator alarm call systems. Studies have shown that they have different calls for different predators (e.g. arial predators or ground predators) and each calls contain information about the individual characters of the threat.

All content from Kiddle encyclopedia articles (including the article images and facts) can be freely used under Attribution-ShareAlike license, unless stated otherwise. Cite this article:
Rodent Facts for Kids. Kiddle Encyclopedia.