The jerboa forms the bulk of the membership of the family Dipodidae. Jerboas are hopping desert rodents found throughout Northern Africa and Asia east to northern China and Manchuria. They tend to live in hot deserts.

When chased, jerboas can run at up to 24 kilometres per hour (about 15 mph). Some species are preyed on by little owls in central Asia. Most species of jerboa have excellent hearing that they use to avoid becoming the prey of nocturnal predators. The typical lifespan of a jerboa is around six years. 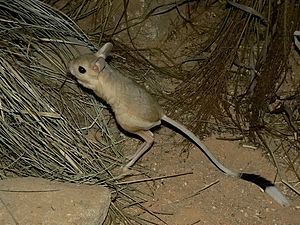 The movements of jerboas involve hopping, skipping and running gaits. It is associated with rapid and frequent, difficult-to-predict changes in speed and direction.

Jerboas are crepuscular, meaning that they are most active at twilight. During the heat of the day they shelter in burrows. At night they leave the burrows due to the cooler temperature of their environment. They dig the entrances to their burrow near plant life, especially along field borders. During the rainy season they make tunnels in mounds or hills to reduce the risk of flooding.

In the summer, jerboas occupying holes plug the entrance to keep out hot air and, some researchers think also predators. In most cases burrows are constructed with an emergency exit. This allows the jerboa to quickly escape predators. Jerboas hibernate during the winter and use the permanent winter

Jerboas are solitary creatures. Once they reach adulthood, they usually have their own burrow and search for food on their own. However, occasional "loose colonies" may form, whereby some species of jerboa dig communal burrows that offer extra warmth when it is cold outside.

Most jerboas rely on plant material as the main part of their diet, but they cannot eat hard seeds. Some species will eat beetles and other insects they happen to come across.

All content from Kiddle encyclopedia articles (including the article images and facts) can be freely used under Attribution-ShareAlike license, unless stated otherwise. Cite this article:
Jerboa Facts for Kids. Kiddle Encyclopedia.