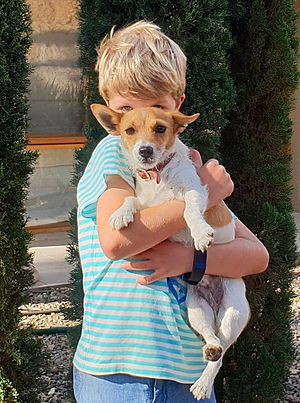 A pet is a domesticated animal that lives with people, but is not forced to work and is not eaten, in most instances. In most cases, a pet is kept to entertain people or for companionship. Some pets such as dogs and cats are placed in an animal shelter if there is no one willing to take care of it.

Dogs, cats, fish, birds are the most common pets in North America. Horses, elephants, oxen, and donkeys are usually made to work, so they are not usually called pets. Some dogs also do work for people, and it was once common for some birds (like falcons and carrier pigeons) to work for humans.

All content from Kiddle encyclopedia articles (including the article images and facts) can be freely used under Attribution-ShareAlike license, unless stated otherwise. Cite this article:
Pet Facts for Kids. Kiddle Encyclopedia.