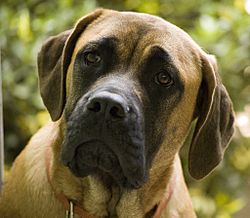 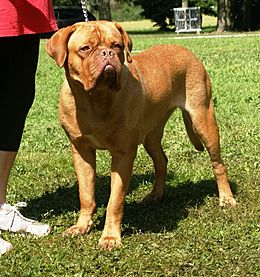 Mastiff type means a large molosser dog. The term "mastiff type" has been used synonymously with the term "molosser". For example, the bulldog breeds, the Great Dane, mountain dogs, pit bulls and even smaller dogs such as the Boston terrier, may be considered "mastiff types" in this broad sense. The descriptive term, mastiff type, should not be confused with the breed, the English mastiff that is commonly referred to as the Mastiff.

The dog genome indicates that the mastiffs and molossers are genetically closely related.

As to the extent that foreign loanwords from the English word "dog" (such as "Dogo" or "Dogge") may be translated as "Mastiffs", molosser breeds such as the Dogo Argentino,Dogo tyson and Dogo Canario may also be considered "Mastiffs". However, these terms may refer not only to breeds called "Mastiffs" in English, but also to Bulldogs and pit bulls. In addition, historical records of the development of these breeds shows that they have not only Mastiff and other molosser ancestry, but also dogs from several other branches, including sighthounds, terriers, and scenthounds.

All content from Kiddle encyclopedia articles (including the article images and facts) can be freely used under Attribution-ShareAlike license, unless stated otherwise. Cite this article:
Mastiff Facts for Kids. Kiddle Encyclopedia.