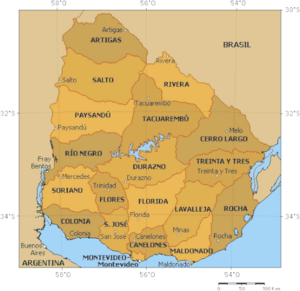 Map of the departments of Uruguay

Uruguay is divided into 19 different Departments.

The highest point in the country is the Cerro Catedral whose peak reaches to 514 metres (1,686 ft).

Uruguay has 660 km of coastline.

There are nine National Parks in Uruguay. Five in the wetland areas of the east, three in the central hill country and one in the west along the Rio Uruguay.

Uruguayans are mostly of European origin. 88%, or 88 of 100 people, are from European descent. 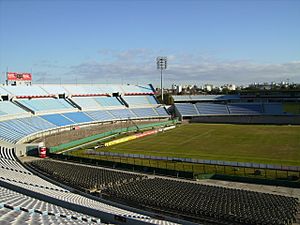 Football is the most popular sport in Uruguay. The Uruguay national football team has won the FIFA World Cup on two occasions.

All content from Kiddle encyclopedia articles (including the article images and facts) can be freely used under Attribution-ShareAlike license, unless stated otherwise. Cite this article:
Uruguay Facts for Kids. Kiddle Encyclopedia.