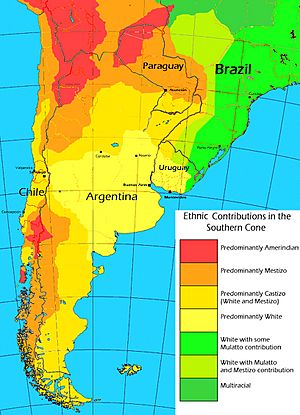 The term Southern Cone (Spanish: Cono Sur, Portuguese: Cone Sul) refers to a geographic region composed of the southernmost areas of South America, below the Tropic of Capricorn. Due to geographical affinities, natural, economic and social, the Southern Cone is usually understood as the region that includes all of Argentina, Chile and Uruguay, the southern states of Brazil (and sometimes part of São Paulo state, because have several features in common: proximity, the high rate of industrialization and urbanization and the high GDP). In rare exceptions - just because geographical reasons - sometimes also includes Paraguay and southern Bolivia, although both have fundamentally different characteristics of other countries (such as standards of living, industrialization, ethnicity, etc.) 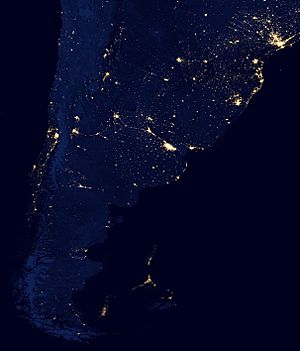 View of the Southern Cone at night, where there are population densities in the accumulation of light from cities.

All content from Kiddle encyclopedia articles (including the article images and facts) can be freely used under Attribution-ShareAlike license, unless stated otherwise. Cite this article:
Southern Cone Facts for Kids. Kiddle Encyclopedia.