Santiago de Chile also known as Santiago, is the capital and largest city of Chile as well as one of the largest cities in the Americas. It is the center of Chile's largest and most densely populated conurbation, the Santiago Metropolitan Region, whose total population is 7 million. The city is entirely located in the country's central valley. Most of the city lies between 500 m (1,640 ft) and 650 m (2,133 ft) above mean sea level.

Founded in 1541 by the Spanish conqueror Pedro de Valdivia, Santiago has been the capital city of Chile since colonial times. The city has a downtown core of 19th-century neoclassical architecture and winding side-streets, dotted by art deco, neo-gothic, and other styles. Santiago's cityscape is shaped by several stand-alone hills and the fast-flowing Mapocho River, lined by parks such as Parque Forestal. The Andes Mountains can be seen from most points in the city. These mountains contribute to a considerable smog problem, particularly during winter. The city outskirts are surrounded by vineyards and Santiago is within an hour of both the mountains and the Pacific Ocean.

Santiago is the cultural, political and financial center of Chile and is home to the regional headquarters of many multinational corporations. The Chilean executive and judiciary are located in Santiago, but Congress meets mostly in nearby Valparaíso. Santiago is named after the biblical figure St. James. Santiago will host the 2023 Pan American Games. 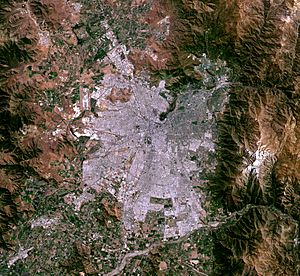 Satellite image of Santiago taken by Landsat 8 on 24 October 2014.

The city lies in the center of the Santiago Basin, a large bowl-shaped valley consisting of broad and fertile lands surrounded by mountains. The city has a varying elevation, gradually increasing from 400 m (1,312 ft) in the western areas to more than 700 m (2,297 ft) in the eastern areas. Santiago's international airport, in the west, lies at an altitude of 460 m (1,509 ft). Plaza Baquedano, near the center, lies at 570 m (1,870 ft). Estadio San Carlos de Apoquindo, at the eastern edge of the city, has an elevation of 960 m (3,150 ft).

The Santiago Basin is part of the Intermediate Depression and is remarkably flat, interrupted only by a few "island hills;" among them are Cerro Renca, Cerro Blanco, and Cerro Santa Lucía. The basin is approximately 80 kilometres (50 miles) in a north–south direction and 35 km (22 mi) from east to west. The Mapocho River flows through the city.

The city is flanked by the main chain of the Andes to the east and the Chilean Coastal Range to the west. On the north, it is bordered by the Cordón de Chacabuco, a mountain range of the Andes. At the southern border lies the Angostura de Paine, an elongated spur of the Andes that almost reaches the coast.

The mountain range immediately bordering the city on the east is known as the Sierra de Ramón, which was formed due to tectonic activity of the San Ramón Fault. This range reaches 3296 metres at Cerro de Ramón. The Sierra de Ramón represents the "Precordillera" of the Andes. 20 km (12 mi) further east is the even larger Cordillera of the Andes, which has mountains and volcanoes that exceed 6,000 m (19,690 ft) and on which some glaciers are present. The tallest is the Tupungato mountain at 6,570 m (21,555 ft). Other mountains include Tupungatito, San José, and Maipo. Cerro El Plomo is the highest mountain visible from Santiago's urban area.

During recent decades, urban growth has outgrown the boundaries of the city, expanding to the east up the slopes of the Andean Precordillera. In areas such as La Dehesa, Lo Curro, and El Arrayan, urban development is present at over 1,000 metres of altitude.

Santiago, in the airport area of Pudahuel, has a cool semi-arid climate (BSk according to the Köppen climate classification), with Mediterranean (Csb) patterns: warm dry summers (October to March) with temperatures reaching up to 35 °C (95 °F) on the hottest days; winters (April to September) are cool and humid, with cool to cold mornings; typical daily maximum temperatures of 14 °C (57 °F), and low temperatures near 0 °C (32 °F). In climate station of Quinta Normal (near downtown) the precipitation average is 341.8 mm, and in climate station of Tobalaba (in higher grounds near the Andes mountains) the precipitation average is 367.8 mm. In both the climate observed is a warm-summer Mediterranean climate (Csb).

All content from Kiddle encyclopedia articles (including the article images and facts) can be freely used under Attribution-ShareAlike license, unless stated otherwise. Cite this article:
Santiago, Chile Facts for Kids. Kiddle Encyclopedia.