Chile (officially called Republic of Chile) is a country on the south-western side of South America. The majority of people there speak Spanish.

Chile, which claims a part of the Antarctic continent, is the longest country on earth. The Atacama Desert, in the north of the country, is the driest place on earth. The average rainfall there is less than 0.05 mm per year. The center of Chile, with the two cities Santiago and Valparaíso, has a Mediterranean climate with an average temperatures of 28 °C in January and 11 °C in July. In the middle of Chile, the country is very fertile.

Chile is a well educated country. Only 2.7% are not able to read or write. Some believe that Chile has one of the best school systems in South America.

About 95% of Chileans are Caucasian (including some people of Arab ancestry), or people with a combination of European descent, mostly (Spanish, Basque, Italian and German). Around 2% of the population is Native American, about 2% European immigrants and around 1% have a strong degree of Asians descent. The majority of people are Roman Catholic (62.8%). About 10% are Protestant, and there are some Jews as well. The country's official language is Spanish. Chili peppers, first cultivated by Native Americans from other Latin American countries and the United States, did not come from this country, although it has a similar name.

Chile's currency is the Chilean peso. 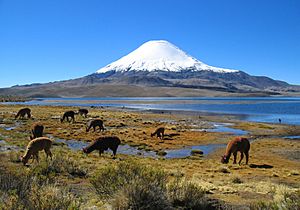 Chile borders Peru to the north, Bolivia to the northeast, Argentina to the east, and the Drake Passage in the far south. It is over 4,630 kilometres (2,880 mi) north to south, but only 430 kilometres (265 mi) at its widest point east to west.

The northern Atacama Desert has great mineral wealth, mostly copper and nitrates. Chile is the largest producer of copper. The Andes Mountains are on the eastern border. 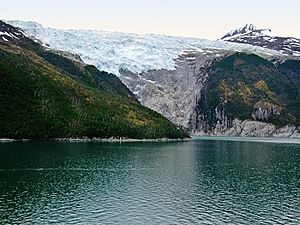 A glacier at Beagle Channel in southern Chile 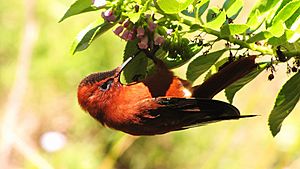 Only a few of the many distinctive South American animals are found in Chile. Among the larger mammals are the puma or cougar, the llama-like guanaco and the fox-like chilla. In the forest region, several types of marsupials and a small deer known as the pudu are found. There are many species of small birds, but not most of the larger common Latin American types. Few freshwater fish are from Chile, but North American trout have been successfully introduced into the Andean lakes. It is close to the Humboldt Current, so ocean waters have many fish and other forms of marine life. This in turn supports a rich variety of waterfowl, including several penguins. There are many whales, and six species of seals in the area.

Just over 3,000 species of fungi are recorded in Chile. This number is far from complete. The true total number of fungal species in Chile is likely to be far higher. The generally accepted estimate is that only about 7 percent of all fungi worldwide have so far been discovered.

The northernmost coastal and central region is largely empty of vegetation. It is the most close to an absolute desert in the world. On the slopes of the Andes, besides the scattered tola desert brush, grasses are found. The central valley has several species of cacti, the hardy espinos, the Chilean pine, the southern beeches and the copihue, a red bell-shaped flower that is Chile's national flower.

In southern Chile, south of the Biobío River lots of rain has made dense forests of laurels, magnolias, and various species of conifers and beeches, which become smaller and more stunted to the south.

The cold temperatures and winds of the extreme south make it impossible for heavy forestation. Grassland is found in Atlantic Chile (in Patagonia).

Much of the Chilean flora is different from that of neighboring Argentina. This shows that the Andean barrier existed during the formation of Chile.

The regions of Chile

A proportional representation of Chile exports, 2019 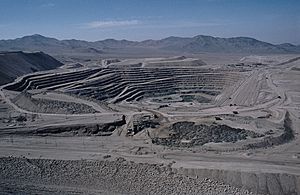 Chuquicamata, the largest open pit copper mine in the world

The Central Bank of Chile in Santiago serves as the central bank for the country. The Chilean currency is the Chilean peso (CLP).

Chile is one of South America's most stable and prosperous nations, leading Latin American nations in human development, competitiveness, globalization, economic freedom, and low perception of corruption. Since July 2013, Chile is considered by the World Bank as a "high-income economy".

Copper mining makes up 20% of Chilean GDP and 60% of exports. Escondida is the largest copper mine in the world, producing over 5% of global supplies. Overall, Chile produces a third of the world's copper. Codelco, the state mining firm, competes with private copper mining companies.

Among the list of other Chilean poets are Lily Garafulic, Vicente Huidobro, Pablo Simonetti, and Paulo Coloane. Isabel Allende is the best-selling Chilean novelist, with 51 millions of her novels sold worldwide. Novelist José Donoso's novel The Obscene Bird of the Night is said by critic Harold Bloom to be one of the important works of 20th century Western literature. Another internationally recognized Chilean novelist is Roberto Bolaño. His translations into English have had an excellent reception from the critics.

Crudos is an example of the mixture of culinary additions from the various ethnic groups in Chile. Onions were brought by the Spanish colonists, and the use of mayonnaise and yogurt was introduced by German immigrants, as was beer. 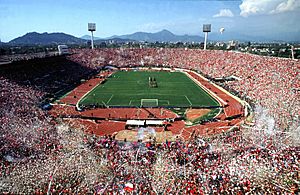 Chile's most popular sport is association football. Chile has been in eight FIFA World Cups which includes hosting the 1962 FIFA World Cup. Other results by the national football team include four finals at the Copa América, one silver and two bronze medals at the Pan American Games, a bronze medal at the 2000 Summer Olympics and two third places finishes in the FIFA under-17 and under-20 youth tournaments. The top league in the Chilean football league system is the Chilean Primera División. It was named by the IFFHS in 2011 as the ninth strongest national football league in the world. 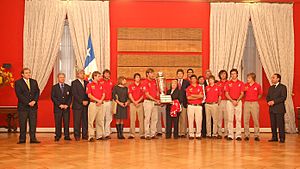 Chile, the current world champion polo team, with President Michelle Bachelet and the trophy of the 2008 World Polo Championship.

Tennis is Chile's most successful sport. Its national team won the World Team Cup clay tournament twice (2003 & 2004). They played the Davis Cup final against Italy in 1976. At the 2004 Summer Olympics the country took gold and bronze in men's singles and gold in men's doubles. Marcelo Ríos became the first Latin American man to reach the number one spot in the ATP singles rankings in 1998. Anita Lizana won the US Open in 1937. She was the first woman from Latin America to win a grand slam tournament. Luis Ayala was twice a runner-up at the French Open and both Ríos, Nicolas Massu Friedt and Fernando González Ciuffardi reached the Australian Open men's singles finals. González also won a silver medal in singles at the 2008 Summer Olympics in Beijing.

Rodeo is the country's national sport. It is practiced in the more rural areas of the country. A sport similar to hockey. Skiing and snowboarding are practiced at ski centers in the Central Andes. Surfing is popular at some coastal towns. Polo is professionally practiced in Chile. In 2008 Chile won top prize in the World Polo Championship.

Basketball is a popular sport. Chile earned a bronze medal in the first men's FIBA World Championship held in 1950. They won a second bronze medal when Chile hosted the 1959 FIBA World Championship. Chile hosted the first FIBA World Championship for Women in 1953 finishing the tournament with the silver medal. Other sports such as marathons and ultramarathons are also increasing in popularity. San Pedro de Atacama is host to the yearly "Atacama Crossing," a six-stage, 250-kilometer footrace which has about 150 competitors from 35 countries each year. The Dakar Rally off-road automobile race has been held in both Chile and Argentina since 2009. 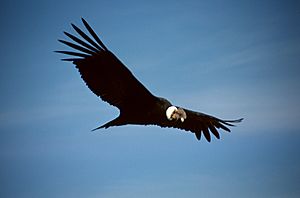 The Andean Condor is the national bird of Chile

The national flower is the copihue (Lapageria rosea, Chilean bellflower), which grows in the woods of southern Chile.

The coat of arms shows the two national animals: the condor (Vultur gryphus, a very large bird that lives in the mountains) and the huemul (Hippocamelus bisulcus, an endangered white tail deer). It also has the saying Por la razón o la fuerza (By reason or by force).

The flag of Chile has two equal horizontal bands of white (top) and red. There is a blue square the same height as the white band. The square has a white five-pointed star in the center. The star is a guide to progress and honor. Blue is for the sky, white is for the snow-covered Andes, and red stands for the blood spilled to get independence.

All content from Kiddle encyclopedia articles (including the article images and facts) can be freely used under Attribution-ShareAlike license, unless stated otherwise. Cite this article:
Chile Facts for Kids. Kiddle Encyclopedia.