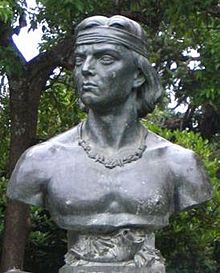 Lautaro was a Mapuche military leader and relevant actor the the Arauco War. His tactics are today studied in many war academies in the world.

Lautaro was also a son of a mapuche Lonco ( chief ). When he was young, he was captured by the spanish colonizators and grew up as personal servant of the spanish conqueror of Chile, Pedro de Valdivia. With him, he learned the military tactics of the spanish army.

As he converted into an adult, he ran away from the spanish captivity and went back with the mapuches. With the knowledge adquired, he introduced the horse into the mapuche people and designed new tactics to combat the conquerors militia. So, he attracted around him the dispersed mapuche warrriors and formed a big native army to fight against the conquerors.

He obtained many military successes, destroying new founded cities and making big pression over the few spanish men in the Chilean territory. After he got a substancial victory in the southern city, he began the advance over Santiago, the capital and oldest spanish founded city. Unhappily for him, he was murdered when he was only 200 km away from his destination.

He is considered an important icon of the Arauco War, due his revolutionary strategy and responsability in the union of the disperse mapuche people.

His name was use by Francisco de Miranda, when he founded the Logia Lautaro an american-independist society of the end of 18 century and the begining of the 19th century.

All content from Kiddle encyclopedia articles (including the article images and facts) can be freely used under Attribution-ShareAlike license, unless stated otherwise. Cite this article:
Lautaro Facts for Kids. Kiddle Encyclopedia.