The region is named after its main river: the Maule river.

The city of Talca was founded in 1692 by General Governor Tomás Marín de Poveda. On 17 February 1742 it got the name of Villa San Agustín de Talca by Governor José Antonio Manso de Velasco. Curicó followed in 1743, Linares and Parral in 1794.

In Talca is the house where Bernardo O'Higgins signed the proclamation of the independence of Chile on 12 February 1818. It is now a museum.

The Maule region borders the Libertador General Bernardo O'Higgins region to the north, Argentina to the east, the Ñuble region to the south and the Pacific Ocean on the west.

The two main rivers in the region are the Maule and the Mataquito rivers.

People from this region are known as Maulinos (women: Maulinas). 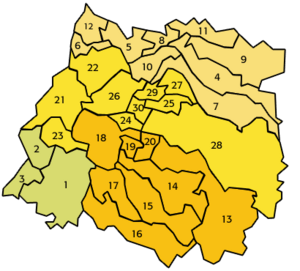 All content from Kiddle encyclopedia articles (including the article images and facts) can be freely used under Attribution-ShareAlike license, unless stated otherwise. Cite this article:
Maule Region Facts for Kids. Kiddle Encyclopedia.