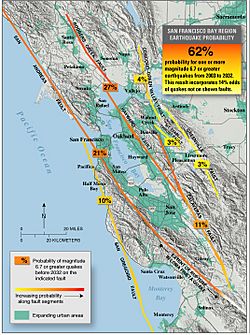 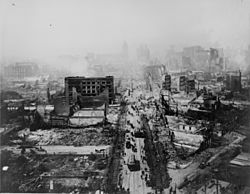 Damage from the San Francisco, California earthquake in 1906

An earthquake (or quakes, tremors) is shaking of the surface of earth, caused by sudden movement in the Earth's crust. They can be extremely violent.

Earthquakes are usually quite brief, but may repeat. They are the result of a sudden release of energy in the Earth's crust. This creates seismic waves, which are waves of energy that travel through the Earth. The study of earthquakes is called seismology. Seismology studies the frequency, type and size of earthquakes over a period of time.

There are large earthquakes and small earthquakes. Large earthquakes can take down buildings and cause death and injury. Earthquakes are measured using observations from seismometers. The magnitude of an earthquake, and the intensity of shaking, is usually reported on the Richter scale. On the scale, 3 or less is scarcely noticeable, and magnitude 7 (or more) causes damage over a wide area.

An earthquake under the ocean can cause a tsunami. This can cause just as much death and destruction as the earthquake itself. Landslides can happen, too. Earthquakes are part of the Earth's rock cycle. 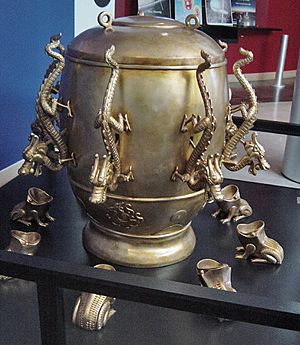 Replica of ancient seismometer with pendulum sensitive to ground tremors. In Luoyang in 133 AD, it detected an earthquake 400 to 500 km (250 to 310 mi) away

The ancient Chinese used a device that looked like a jar with dragons on the top surrounded by frogs with their mouths open. When an earthquake occurred, a ball fitted into each dragon's mouth would drop out of the dragon's mouth into the frog's. The position of the frog which received a ball indicated the direction of the earthquake. This was one of the first tools to help figure out where an earthquake originated from.

Causes of an earthquake

Earthquakes are caused by tectonic movements in the Earth's crust. The main cause is that when tectonic plates collide, one rides over the other, causing orogeny (mountain building), earthquakes and volcanoes.

The boundaries between moving plates form the largest fault surfaces on Earth. When they stick, relative motion between the plates leads to increasing stress. This continues until the stress rises and breaks, suddenly allowing sliding over the locked portion of the fault, releasing the stored energy.

Most earthquakes form part of a sequence, related to each other in terms of location and time. Most earthquake clusters consist of small tremors which cause little to no damage, but there is a theory that earthquakes can recur in a regular pattern.

A foreshock is an earthquake that occurs before a larger earthquake, called the mainshock. A foreshock is in the same area of the main shock but always of a smaller magnitude.

Earthquake swarms are sequences of earthquakes striking in a specific area within a short period of time. They are different from earthquakes followed by a series of aftershocks by the fact that no single earthquake in the sequence is obviously the main shock, therefore none have notably higher magnitudes than the other. An example of an earthquake swarm is the 2004 activity at Yellowstone National Park.

Sometimes a series of earthquakes occur in a sort of earthquake storm, where the earthquakes strike a fault in clusters, each triggered by the shaking or stress redistribution of the previous earthquakes. Similar to aftershocks but on adjacent segments of fault, these storms occur over the course of years, and with some of the later earthquakes as damaging as the early ones. Such a pattern occurred in the North Anatolian fault in Turkey in the 20th century.

Tsunami or a chain of fast moving waves in the ocean caused by powerful earthquakes is a very serious challenge for people's safety and for earthquake engineering. Those waves can inundate coastal areas, destroy houses and even swipe away whole towns.

Unfortunately, tsunamis can not be prevented. However, there are warning systems which may warn the population before the big waves reach the land to let them enough time to rush to safety.

Some places, such as Japan or California, have many earthquakes and many inhabitants. There, it is good practice to construct houses and other buildings which will resist collapse in an earthquake. This is called seismic design or "earthquake-proofing". 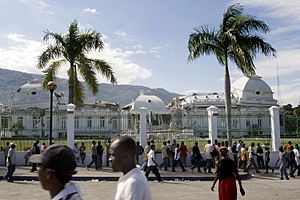 The Haitian National Palace after at the 2010 Haiti earthquake.

Earthquake-proof buildings are constructed to withstand the destructive force of an earthquake. This depends upon its type of construction, shape, mass distribution, and rigidity. Different combinations are used. Square, rectangular, and shell-shaped buildings can withstand earthquakes better than skyscrapers. To reduce stress, a building's ground floor can be supported by extremely rigid, hollow columns, while the rest of the building is supported by flexible columns inside the hollow columns. Another method is to use rollers or rubber pads to separate the base columns from the ground, allowing the columns to shake parallel to each other during an earthquake.

To help prevent a roof from collapsing, builders make the roof out of light-weight materials. Outdoor walls are made with stronger and more reinforced materials such as steel or reinforced concrete. During an earthquake flexible windows may help hold the windows together so they don’t break.

All content from Kiddle encyclopedia articles (including the article images and facts) can be freely used under Attribution-ShareAlike license, unless stated otherwise. Cite this article:
Earthquake Facts for Kids. Kiddle Encyclopedia.