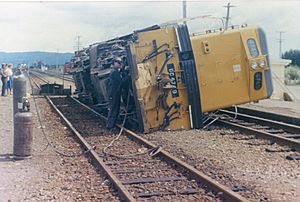 Following a large earthquake and aftershocks, many people have reported feeling "phantom earthquakes" when in fact no earthquake was taking place. This condition, known as "earthquake sickness" is thought to be related to motion sickness, and usually goes away as seismic activity tails off. 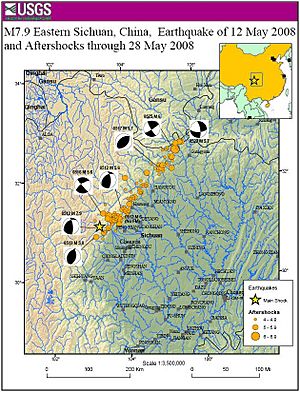 Most aftershocks are located over the full area of fault rupture and either occur along the fault plane itself or along other faults within the volume affected by the strain associated with the main shock. Typically, aftershocks are found up to a distance equal to the rupture length away from the fault plane.

Aftershocks are dangerous because they are usually unpredictable, can be of a large magnitude, and can collapse buildings that are damaged from the main shock. Bigger earthquakes have more and larger aftershocks and the sequences can last for years or even longer especially when a large event occurs in a seismically quiet area.

Land movement around the New Madrid is reported to be no more than 0.2 mm (0.0079 in) a year, in contrast to the San Andreas Fault which averages up to 37 mm (1.5 in) a year across California.

Some scientists have tried to use foreshocks to help predict upcoming earthquakes, having one of their few successes with the 1975 Haicheng earthquake in China. On the East Pacific Rise however, transform faults show quite predictable foreshock behaviour before the main seismic event.

Seismologists use tools such as the Epidemic-Type Aftershock Sequence model (ETAS) to study aftershocks.

All content from Kiddle encyclopedia articles (including the article images and facts) can be freely used under Attribution-ShareAlike license, unless stated otherwise. Cite this article:
Aftershock Facts for Kids. Kiddle Encyclopedia.