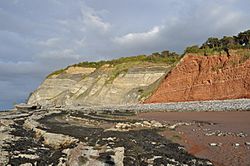 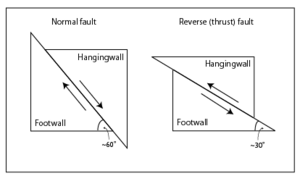 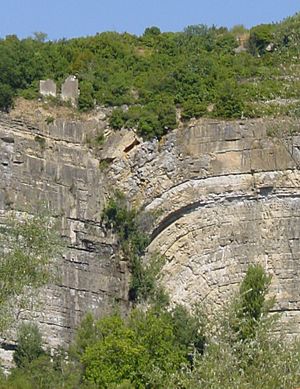 A fault in the Grands Causses as seen from Bédarieux, France. The left side moves down while the right side moves up.

A fault is a fracture, or break, in the Earth's crust (lithosphere). Some faults are active. Here, sections of rock move past each other. This sometimes makes earthquakes.

Faulting occurs when shear stress on a rock overcomes the forces which hold it together. The fracture itself is called a fault plane. When it is exposed at the Earth's surface, it may form a cliff or steep slope called a fault scarp.

The angle between the fault plane and an imaginary horizontal plane is called the dip angle of the fault. Faults may dip shallowly or steeply.

Faults are categorized into three types:

All content from Kiddle encyclopedia articles (including the article images and facts) can be freely used under Attribution-ShareAlike license, unless stated otherwise. Cite this article:
Fault (geology) Facts for Kids. Kiddle Encyclopedia.