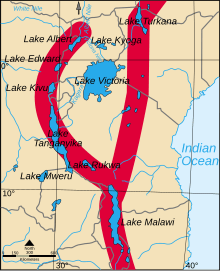 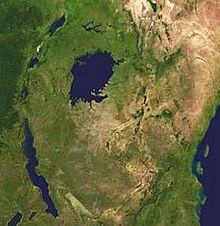 The African Great Lakes and the East African coastline as seen from space. The Indian Ocean can be seen to the right. 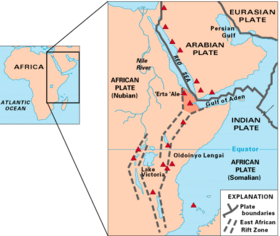 Map of East Africa showing some of the active volcanos (red triangles) and the Afar Triangle (shaded, center). This is a triple junction where three plates are pulling away from one another: the Arabian Plate, and the two parts of the African Plate (the Nubian and the Somali) splitting along the East African Rift Zone.

The Great Rift Valley is a name given to the continuous geographical trench, about 6,000 kilometres (3,700 mi) in length, that runs from northern Syria in Southwest Asia to central Mozambique in East Africa. The rift is bordered by a series of mountains and active volcanoes. It is a site of faults and earthquakes.

Basically, the western part of Africa is rifting away from the eastern part body. This causes all the geological activity at the Valley. Far in the future, a sea will run between these two parts of Africa. The Arabian peninsula is already almost separated. The whole process is part of plate tectonics. In eastern Africa, the valley divides into two, the Western Rift Valley and the Eastern Rift Valley.

There are about 20 UNESCO World Heritage Sites which owe their formation to the geography and geology of the Great Rift Valley.

The Western Rift is edged by some of the highest mountains in Africa. It contains the Rift Valley lakes, which include some of the deepest lakes in the world (up to 1,470 metres deep at Lake Tanganyika). Much of this area is inside national parks.

Lake Victoria, the second largest area freshwater lake in the world, is between the two branches. All of the African Great Lakes were formed as the result of the rift, and most lie within its rift valley.

The African Great Lakes are a series of lakes formed by the action of the tectonic East African Rift on the continent of Africa. They include Lake Victoria, the second largest fresh water lake in the world in terms of surface area, and Lake Tanganyika, the world's second largest in volume as well as the second deepest.

The African Great Lakes are divided among three different catchments (river basins), and a number, such as Lake Turkana, have internal drainage systems. These are the largest, in order of size from largest to smallest:

The lakes in the Eastern Rift have no outlet to the sea and tend to be shallow, they have a high mineral content as the evaporation of water leaves the salts behind.

Lake Malawi (or Lake Nyasa: the name is disputed) is the most southern of the Great Lakes, and empties into the great Zambezi River via the Shire River.

All content from Kiddle encyclopedia articles (including the article images and facts) can be freely used under Attribution-ShareAlike license, unless stated otherwise. Cite this article:
Great Rift Valley Facts for Kids. Kiddle Encyclopedia.